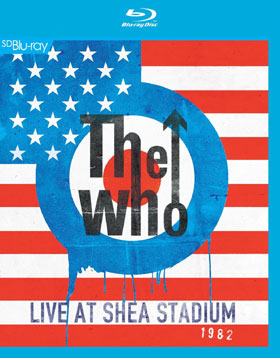 In the eyes of most pop music historians, The Who circa 1982 gets a pretty bad rap. With the hindsight of history, it’s not that difficult to understand why. Drummer Keith Moon had died in 1979, just before the release of Who Are You. The group enlisted former Small Faces drummer (and authentic “mod”) Kenney Jones to fill the drum throne, a move that enraged a certain subset of Who fans. And the pair of post-Moon Who albums – 1981’s Face Dances and It’s Hard from the following year – didn’t rate among anyone’s choice for best albums of the group’s career. And with a bit more hindsight, the marketing of the 1982 tour can look like a case of misleading advertising: as the live document of that tour, the largely uninspired 2LP set was called Who’s Last, the group was more or less expected to hang it up and go their separate ways after the tour. They didn’t, instead reuniting multiple times and eventually (2006) releasing new studio material.

Some bigger problems for the group were internal: Pete Townshend was mired in drug and alcohol abuse, and racked with self-doubt and confusion about his artistic direction; Roger Daltrey never could get on with Jones.

It was amidst this backdrop that The Who mounted a massive tour, documented now a third of a century later, on Live at Shea Stadium. Those who know the group’s history and/or those who have sat through Who’s Last would likely expect this video (on DVD and Blu-ray) to be a dull and lifeless affair, a document of a group past their prime and with little left to say.

And they’d be wrong. The band are shown here in fine form. Daltrey is athletic, and his voice is powerful yet controlled. Bassist John Entwistle is rock solid, with respect to both his stage movements (nearly imperceptible) and his bass playing (sterling and thunderous). Townshend looks more than a bit silly in his trendy clothes and haircut; he looks to all the world like the middle-aged guy who’s trying more than a bit too hard to fit in with the younger crowd. (And by all available accounts, that’s almost exactly what was happening with him at the time.) Jones is doing more than an acceptable job; rather than attempting to ape Moon’s drumming style – a feat largely impossible anyhow – he plays the drums forcefully, but in a manner consistent with his work up to that point. Remember that this was a man who had played on quite a few studio albums and performed countless live dates before joining The Who; it’s not as if Daltrey and his band mates wouldn’t have known what they were getting with Jones. (Keyboardist Tim Gorman is kept in half-light nearly offstage.)

For those who didn’t witness the ’82 tour firsthand (I attended a date on the brief 1980 tour), the Who’s Last album has until now been the more-or-less official record of that period for those who cared enough to listen. And it presented a lopsided picture of those tour dates. As was (and probably remains) standard practice, the concert tapes were edited to remove songs that had been released not long earlier as studio tracks. So Who’s Last came off like an oldies revue, a perception reinforced by the encore number, an Entwistle-led “Twist and Shout.” The world didn’t need another version of that song in 1982.

But Live at Shea Stadium – documenting the second of two nights at the New York City landmark, with some bonus tracks culled from the previous night – presents a more complete picture of The Who live onstage. And they’re better, more fiery that one might have remembered. They blast through a set list that includes the de rigueur chestnuts (“Substitute,” “Baba O’Reilly,” “Pinball Wizard,” and you can probably name the rest), but they also pepper the set with selections from Who Are You (including the underrated “Sister Disco”), Face Dances (unfortunately only Entwistle’s “The Quiet One” but not the vastly superior “Another Tricky Day”), and the then-new It’s Hard (most notably the late-period classic “Cry If You Want”). On all of these, not only does the band turn in an excellent performance, but they seem actually to be enjoying being onstage together.

Much of early 1980s videotape has a curious visual quality that makes it feel dated and sterile. The video here – described on the package as “upscaled standard definition original material” – looks quite good, and the multiple-camera production is typically professional for its vintage. The sound is excellent, especially in high-definition stereo and DTS-HD Master Audio.

So while this 1982 concert video doesn’t represent The Who at their pinnacle – one could argue endlessly on that score – neither does it show them at their nadir (for that, I would refer you to the 3LP set Join Together, a document of their overblown and uninspired 1989 concert tour). Thanks to this new video, the group’s 1982 tour can now been seen as an important – if not strictly essential – chapter in The Who’s story. Live at Shea Stadium 1982 is well worth viewing for fans.