Album Mini-review: Led Zeppelin — In Through the Out Door 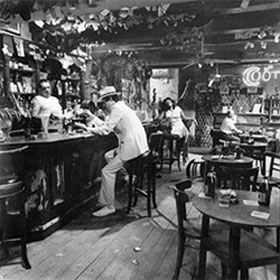 At the time of its original release, In Through the Out Door was problematic for some longtime Zep fans; it featured more keyboards – synthesizers, even! – than was typical of a Zep LP, and guitarist Jimmy Page‘s involvement seemed muted. That perception was quite accurate: owing to extramusical matters (did somebody say drugs?), Page loosened his grip on the project. The result was an album that showcased John Paul Jones‘ talents. With hindsight, the album now seems a logical musical progression. A few missteps (“Hot Dog,” perhaps) don’t detract from what is ultimately one of their most consistently melodic offerings. The disc is reliably adventurous as well. The reissue adds seven largely superfluous bonus tracks; these embryonic versions don’t differ significantly from the finished versions. In what might be a sly, grudging nod to to the song’s radio-readiness, the early version of “All My Love” is titled “The Hook.”