Backstage with Led Zeppelin 2: The Songs Remain Quite Similar 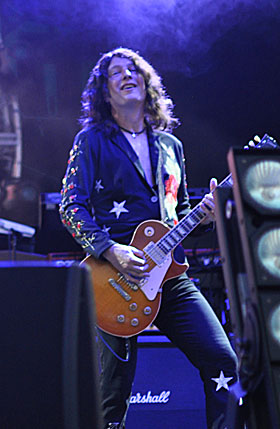 Recently, I traveled to Charlotte NC to take in a concert that I considered a double bill: tribute bands Led Zeppelin 2 and The Australian Pink Floyd Show. Both put on superb shows that brought the amphitheater crowd to its feet. Before the show started, I enjoyed a few minutes backstage in conversation with Led Zeppelin 2’s guitarist, Paul Kamp. We talked about the group’s approach to material, how they do it, why they do it, and how it all fits into the bigger picture.

Chicago-based tribute band Led Zeppelin 2 grew out of a power trio called Busker Soundcheck; the band actually got started over ten years ago. But at that stage, “It was only a Halloween thing,” says Kamp. “We would play once a year, maybe. And one time we didn’t even play at all for two years. It was a very loose thing; we didn’t even have a name. We were just ‘those guys that play those Led Zeppelin songs.’”

A local club owner in Chicago wanted to book them, but he told the group, “I don’t want it to be on Halloween.” So they booked a Saturday night, and it was a rousing success.

Those who heard the unnamed group liked what they heard, and encouraged the band to take things more seriously. So Kamp and his bandmates did just that. “The very first time that we went on the road to Houston, it was a real eye opener,” Kamp recalls. “It was an 1800-seat venue – we had never played in Houston before – and the place sold out! We don’t even know how people heard about us, because there are other Led Zeppelin tribute bands, too.”

As soon as they went national, Led Zeppelin 2 was drawing big numbers for their shows. “There still are some towns where the crowds are pretty small,” Kamp says with a sly grin, but those are becoming fewer and farther apart these days.

Drummer Ian Lee and bassist/keyboardist Matthew Longbons are relatively new to the group, but vocalist Bruce Lamont is, along with Kamp, a founding member of Led Zeppelin 2. And in addition to getting the sound right, the group pays attention to the gear they use onstage. “Visually, a Gibson Les Paul works the best,” admits Kamp. “Sonically, it works the best, too. And you need to have that double neck guitar to play ‘Thank You.’ And then you need it for “Stairway to Heaven.’ And then you realize you need it for ‘The Song Remains the Same,’ and ‘The Rain Song,’ and so on. Sometimes,” he laughs, “I’ll just pick up that guitar and play it, because it’s pretty cool.” Kamp uses vintage 1970s-era Marshall amplifiers “because I think they sound the best. Not necessarily just because Jimmy Page used them.”

The group draws upon all available resources to inform their performances of the classic Led Zeppelin catalog. “We listen to every recording of a song that we can get our hands on,” Kamp says. “We do some of the songs close to the studio recordings. But even when we’re playing the notes close to the recordings, I think that you’ll find that the dynamics are more like a live rock’n’roll band.” He notes that their version of “Thank You” is “similar to the version that was on the BBC recordings. We do our own thing with sections of it, but we try to capture the tones and the highlights of all the riffs.” 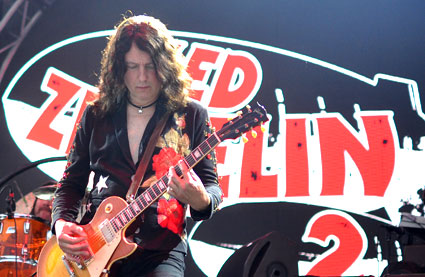 As needed, the band makes some practical compromises to fit the music into a shorter set, such as the hour-long opening set they delivered this night in Charlotte before headliners The Australian Pink Floyd Show took the stage. “’Dazed and Confused’ is twenty-eight minutes long in The Song Remains the Same version,” Kamp laughs. “And there are many other [recorded] versions where it’s thirty-three or more. People may have been willing to sit through the real Led Zeppelin doing that, but honestly, I’m not sure even I want to hear a thirty-three minute version!” Onstage, Led Zeppelin 2 manages to distill the essence of Zep’s songs into more compact readings; their version of “Moby Dick” – complete with obligatory drum solo – is quite satisfying even in a six-minute arrangement.

That approach keeps them connected to their audience. “Sometimes we think, ‘We’ve been flying by the seat of our pant for five minutes,’” Kamp says, “’And we’d better pull it back together so that the audience can feel pulled back together.’ And then you can see it on their faces: ‘Wow, I wasn’t expecting this!’”

Not every Led Zeppelin song is right for a show. “The only Zeppelin song that we just don’t like playing is ‘Fool in the Rain.’ Great drum part, okay vocal part. The guitar riff is – meh – it’s okay. The solo is cool. People like it. But it’s just one that we played four or five times.” The Song Remains the Same‘s “D’yer Maker” is another iffy one for the band. “It’s super popular, and it goes over really well,” Kamp concedes. “But we personally just don’t like playing it.” On the other hand, deep cuts like “Hats Off (To Roy Harper)” is a band favorite. “We’ve played every song on Presence except ‘Tea for One,’ but we cop little licks from that, and throw them into other songs.” All in all, the foursome balances their set with hits and a few less well-known numbers, and in the process they please concertgoers who want an experience that feels like a 1970s-era Led Zeppelin concert.

Even though Led Zeppelin 2 is a popular draw on the concert circuit – the band stays busy – it’s not an all-consuming endeavor for Kamp and his bandmates. “My wife and I have four companies, and we have three kids,” he says. When he has spare time at home, Kamp still comes up with riffs and original songs that might – at some undefined point in the future – find their way onto a recording.

Kamp is driven to do what he does by a simple and straightforward motivation. “Robert Plant once said that music is supposed to be about people having a good time and celebrating. There’s some kind of magical appeal that Led Zeppelin has. But I think that it goes through Led Zeppelin, Muddy Waters, John Lee Hooker, Willie Dixon, Howlin’ Wolf, Buddy Guy and Junior Wells. Right down south to the old acoustic Delta blues. And that music came from another continent where drums and music were about celebration. They represented memories of things and people, and rejuvenation.

“People have said this to me many times: ‘I’ve worked all week, and my friend dragged me along to this show. I thought it was gonna suck! But you were really good! I’ve got to admit, I had a really good time!’ And,” Paul Kamp smiles as he picks up his guitar to take the stage, “that’s the best possible kind of reaction we can get.”