Home  »  book • new release • review   »   Book Review: So Many Roads, The Life and Times of The Grateful Dead

Book Review: So Many Roads, The Life and Times of The Grateful Dead 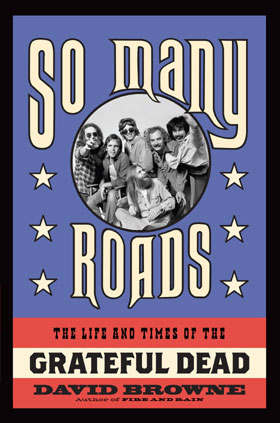 I’m on record as being very critical of The Grateful Dead. Despite what some of the hardest of hardcore Dead Heads might think, I don’t hate the Dead; not at all. I own and enjoy quite a few of their studio albums, and even like a couple of the live ones, most notably, Europe ’72 and Reckoning (aka For the Faithful). And far be it from me to deny their cultural (if perhaps not so much musical) importance. So I was very interested to read David Browne‘s So Many Roads, a new history of the band that takes a unique approach to its storytelling.

That unique approach is the best thing about Browne’s book. Rather than attempt a linear narrative, Browne picks fifteen specific dates in the history of the band, and expands the story from there. Those dates are sometimes pivotal, sometimes not. But they provide anchors of a sort from which the author can weave the tale. Browne recounts the important dates in the band’s history – December 6, 1969, for example, was the date of the notorious festival at Altamont Motor Speedway – but he doesn’t build the narrative around them; Altamont is discussed in the first chapter, one that ostensibly centers on a date some two months later.

As the author explains in the book’s acknowledgments, So Many Roads draws upon extensive interviews with many people in and around the group: musicians, friends and ex-friends, lovers and ex-lovers, business associates and ex-associates, fans. In general, such an approach can provide the opportunity to create a nuanced, balanced portrait of its subject. And to an extent, that’s what happens with Browne’s book. But although most key members of the group cooperated with the author, So Many Roads seems to draw remarkably little from their input. Perhaps the information Browne gleaned from those interviews formed a narrative rather than direct quotes; but that’s merely a guess.

Browne is a clear and insightful writer, and although So Many Roads is a long book (nearly 500 pages), its most striking quality is its lack of surprises. There are no real revelations within its pages. Instead readers get relatively cursory accountants of how Lenny Hart (Mickey Hart‘s father) ripped the band off of substantial sums of money; how they were caught off guard by the tragic events of Altamont; and so on. None of that will be news to even the most casual fan of the Grateful Dead.

Neither is it news that the band approached album recording sessions with a the sort of dismissive, let’s-get-it-over-with attitude most people bring to a dentist appointment (and it often showed on the albums). It’s not a surprise that (on one hand) the Grateful Dead were totally out of their depth running a record label of their own, or any business, for that matter, and (on the other hand) that they strongly resisted “interference” from outsiders (“suits”) who might have been able to do a better job. And it will surprise absolutely no one that they took a whole lot of drugs, only instituting a “no piles of cocaine on the performing stage” policy in the 1990s. Yes, the nineteen-nineties. (Apparently the nitrous oxide tanks stayed.)

Browne makes the point that there really is not a “keyboard player curse” upon the band, pointing out that Tom Constanten and Bruce Hornsby remain among the living (Ron “Pigpen” McKernan, Keith Godchaux, Brent Mydland and Vince Welnick, however, all did die prematurely). The band members’ laissez-faire approach to each others’ private lives – even when said behavior had serious effects upon the band – is shown to be a primary cause of many of the problems they’d endure.

Though the band seemed to operate in a way that encouraged a sort of leaderless democracy by consent, So Many Roads illustrates that in practice Jerry Garcia was the leader of the band. Any number of meetings are described in which the various members and auxiliary staff would chew on a topic for some time, unable to reach agreement. Garcia would utter a few words – “let’s do it” or some such – and that would be that. This approach may have served them well in their earlier days, but as Garcia’s health problems (drug-induced and otherwise) worsened, it seems pretty clear that having him in a so-called leadership role was, in practice, a pretty awful idea.

In fact, the band’s method of dealing  with Garcia — seemingly as a sort of cash cow that they’d need to prop up so they could keep the machine running — made me think of him as a sort of corollary to The Beach Boys‘ pimping of Brian Wilson (witness the endless “Brian’s back!” efforts of the 70s and 80s).

I suppose one cannot understand the mindset of a Dead Head unless one is a Dead Head. For me, the group’s hardcore appeal is dubious: if one wants exploratory music, any number of jazz artists did it far better than the Grateful Dead. And if one desires musicality within the “jam band” idiom, The Allman Brothers – live and studio – make for a much more fulfilling listen. Sloppy and listless are two words that come to mind when discussing the onstage musicianship of the Dead. And their hardcore fan base seems inexplicably uncritical when it comes to the Dead’s legacy: they love it all, seeming to make little discernment between the dross and the relatively fleeting flights of creativity.

And with that kind of mindset, they’ll probably want to read So Many Roads regardless of whether a reviewer eviscerates it or holds it up as the greatest book ever written. Truth be told, it’s quite good; it’s simply not anything like a definitive biography of the band.