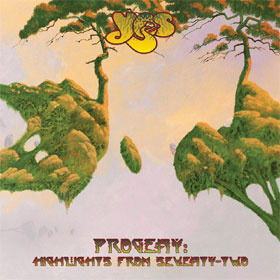 It was just a bit more than three years ago today that I got the opportunity to speak with Chris Squire of Yes. Though he was never put forth as the “leader” of the group – more than most any other group of the era, Yes never really seemed to have one out-front, in-charge member – he was easily the foundation of the group from its beginning to what may well be its end. On June 27, the bassist passed away after a short battle with a rather aggressive form of leukemia.

The group’s membership was a constantly-shifting lineup, but for most fans, the “classic” lineup featured Jon Anderson on vocals; Squire on bass, Steve Howe on guitar, Rick Wakeman on keyboards, and either Alan White or Bill Bruford on drums. It was during the transition between Bruford and White on the drum throne that the group recorded the music that would be put together as the sprawling 3LP live set, Yessongs.

Through 1972 and into ’73, Yes toured the UK and the USA, and selections from those shows were used to compile Yessongs; the film was not a straight duplicate of the album, as Yessongs-the-movie was the document of a single December ’72 performance in London. Though the playing on Yessongs was predictably impressive, the sound quality was not. Other live albums would follow, but Yessongs was pretty much all Yes fans had in the way of official live recordings of the classic lineup in their prime.

But just like the situation surrounding The Who‘s Live at Leeds, it turns out that other shows from the Yessongs era were recorded. As producer Brian Kehew explains in the liner notes for Progeny: Highlights from Seventy-Two, there were serious technical problems with those recordings. But thanks to modern technology, by 2015 there existed a way to correct those issues without changing the nature of the music as played and recorded.

The result of those efforts is the new, exhaustive 14CD set Progeny: Seven Shows from Seventy-Two. With a title that explains exactly what is contained, Progeny presents the complete documents of seven Yes shows. And while Yes didn’t offer much in the way of spontaneity when it came to their set lists – every night features the same songs in the same order – their performances varied enough from night to night to make a massive set like this worth hearing. 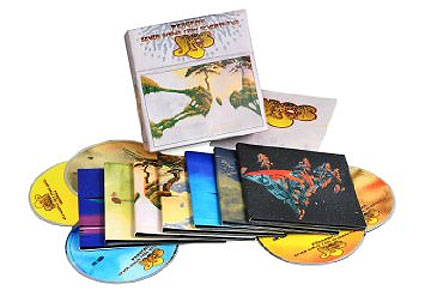 Worth hearing for fans of Yes, that is. But if you’ve read this far, chances are good that describes you. With sound quality that is far superior to anything heard on Yessongs, Progeny captures the band once they had settled into having White as their drummer.

In the early 1970s, opening one’s concert with a taped playback of some classical piece was the thing to do. Elvis had “Also Sprach Zarathustra” played over the PA. Yes opted for a clip of Stravinsky‘s ‘Firebird Suite.” But unlike on Yessongs, the Progeny versions let us hear the band use the playback as a reference for tuning up their instruments. Squire’s bass and Wakeman’s by-its-very-nature-finicky Mellotron can clearly be heard.

The Progeny recordings present the concerts the way they were played, whereas Yessongs rejigged the song order. But what really matters is the music, and the high quality recordings thereof. Throughout these hours and hours of tapes, what one hears is a tightly focused yet “breathable” ensemble who could bend and sway with the song arrangement without breaking.

Anderson’s voice is crystal-clear on these recordings. And while everyone’s impressive, Wakeman’s keyboard and Squire’s bass guitar parts benefit the most from the imported sonic clarity. The throaty, trebly-but-not-trebly Rickenbacker bass work of Chris Squire positively thunders while acting as an additional “lead” instrument alongside Wakeman’s synth lines and Howe’s guitar runs.

The differences between the various shows – mostly recorded in the deep south of the USA – are sometimes subtle, but on the solo spots, the performances vary to a much greater degree. Besides the improved sonics, Howe’s “Clap”is remarkable for the ways in which the guitarist alters the song for each show. The same is true of Wakeman’s spotlight number, “Excerpts from The Six Wives of King Henry VIII.”

Unlike The Grateful Dead – another band who released a 1972 triple-live album (Europe ’72) and followed it decades later with a box set of more shows from the tour – Yes didn’t noodle onstage. The nature of their music was tightly structured pieces. Those pieces went places for sure, but the five band members went there together, not apart. And following along on their journey – especially now that there’s zero chance for that lineup to make music together again – is an experience that’s rich both in nostalgia and in just plain great listening.

For those disinclined toward the large investments in time and money required by Progeny: Seven Shows from Seventy-Two, the 2CD Highlights set presents a sampling from the set, and in doing so, provides an audio document that one could consider a sort of Yessongs 2.0. So hold onto your copy of Yessongs for the groovy triple-gatefold album art, and spin Progeny: Highlights from Seventy-Two to make yourself feel as if you are there.

Tomorrow, a look at yet another new live recording from Yes.