For all intents and purposes, World Party is Karl Wallinger. Across five studio albums, a spiral-bound 4CD closet-clearing set, and a few best-of collections, the Welsh-born Wallinger has delivered a consistent set of wonderfully melodic music that draws from the classic era of rock without ever directly referencing it. With a new album slated for release next year, World Party will break what to the uninitiated might look like a “dry spell,” but Wallinger has remained very active with playing, touring, and writing music. He’s currently on tour with (as you’ll read) a World Party of varying size, and that tour will bring him to Asheville, North Carolina’s Altamont Theatre on Monday, July 6. I spoke with Wallinger during a brief break before a show last week. We discussed his early days, his approach to recording, some setbacks over which he’s triumphed, and his plans for the immediate future. Here, in two parts, is our conversation. – bk

Bill Kopp: Way, way back when, you were musical director for the London version of The Rocky Horror Show. I’m interested to know what kind of lessons you feel you learned from that experience; did it affect your approach to songwriting? 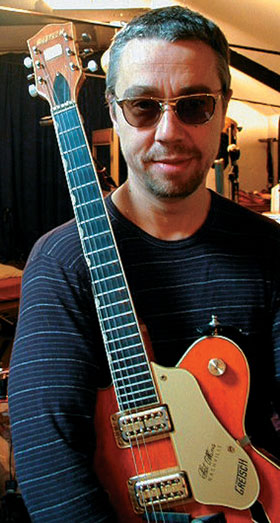 Karl Wallinger: I learned that it was very pleasant to have rehearsals during which you’d have a lady sitting on your lap and wearing only the bottom half of a suspender belt and stockings, and nothing on the top.

I learned that it was great fun being in a theatre. It’s like a mother, with lots of these kids running around in it. It’s a strange thing; you’d think it would be kind of monotonous every night. But every day is a different day, and it’s its own crazy world. It’s a lovely thing to do. Rocky Horror was really one of things I could do; I wasn’t really a person who was going to do that kind of thing, but I was lucky enough that I did do it. I always loved it, even before I worked on it. I had a great time.

I paid to see it years earlier, with my girlfriend at the time and her mother, in London. And I didn’t know I was going to be the Musical Director at the end of that run; pretty funny.

BK: Over the course of your career, you’ve done a lot of your recording at home at Seaview and so forth, and you’ve worked in more conventional studios. I’m sure there are advantages and disadvantages to both work situations. Can you talk a bit about that?

KW: One of the advantages of using someone else’s studio is that you can leave it in a mess, and someone else will clear it up!

I’ve always been somebody who would rather work on their own, in their own space. But when you’re doing something like a film soundtrack, if you’re working on something that’s got a purpose beyond the getting out of ideas — something that’s got to be matched to a picture — then it’s good to be in a place where other people have got the technical worries. Then you can just do the creativity-kind of thing.

Not that I can’t do the [technical tasks]; I’ve probably done that, but it’s nice in those situations to be taken care of by somebody. I find the technical bits quite boring, actually. It’s a drag when things don’t work, or [when] they take a lot of setting up. I’d rather get someone else to blow the paddling pool up, and then I can just add the water.

When I’m doing songs, I prefer to be in a place where I can forget that I exist. Then I just try to let the old brain do the work, really. Rather than the body. It’s a space to be creative in, to do whatever you want to do. And there’s no other considerations; you’re not paying an hourly rate, and there aren’t engineers or producers who are around, people who have also got lives. So you can let it all hang out when you’re working on your own. And I prefer that. As a way of creating what I do as World Party, that’s the way.

I haven’t got a studio at the moment; I haven’t had one for four years now. I’m just about now, hopefully, to have a studio again. I’m in negotiations with a particular place in England. And as soon as I do have, I’m going to lock myself away in it.

BK: When I try to describe your music to those who haven’t heard it – and I do evangelize about World Party a good bit – I describe it as original music that bears the influence of (among other things) three specific artists: Van Morrison, Sly Stone, and The Beatles. Do you think that’s a fair assessment, and are there any artists you’d add to the top of that list?

KW: I don’t really think of it in terms of artists, really. Obviously the Beatles have had a large effect. But it’s just in terms of intake, really. It’s up to experience, what you’ve been around on the planet.

I certainly wouldn’t think that Van Morrison would be, to me, that much of an important influence. I suppose there’s some part of it: that carefree, facing-the-wind, running across the plinth tops kind of aspect. Generally, the sixties; to me, those were the formative years. Anybody’s formative years make them seem like they were the center, the start, the basis of their thought.

So it’s not really a specific thing. It’s as much the soundtrack of Hair, or Cat Stevens. A whole bunch of stuff.

BK: Among hardcore World Party fans – and I suppose I’m one of those – there circulate recordings that you’ve made, cover versions of songs you like. The approach reminds me of Dave Gregory‘s Remoulds project. Some of these include John Lennon‘s “#9 Dream,” Peter and Gordon‘s “World Without Love,” “Nowhere Man,” Mott the Hoople‘s “All the Young Dudes,” and so on. When you were a pre-teenage kid growing up in Wales in the late 1960s, what were your favorite songs? Anything “outside the box” or a bit unusual, like Keith West‘s “Excerpts From a Teenage Opera,” or things like that?

KW: We had quite a middle-of-the-road record collection. Maybe twenty albums and forty singles; that and the radio. That’s what we had. I used to endlessly rotate them through, using the auto-drop arm on the record player. I’d sort of deejay myself into happiness, because I loved all the music. I loved it. I don’t know why; I just gravitated toward it.

I spent most of my time in front of the stereogram that we had, which had a pull-out drawer for the radio, and a drop-down door for the turntable. And two elliptical speakers. And I’ve just now had it done up; I’ve kept it all these years; it’s been in my studio. This eighty-year-old guy came round to the house, and took the radio and deck away, repaired them, and came back with them. He actually put a socket into it so you can put an iPhone through it as well. So if you’ve got Billie Holiday or Aretha Franklin on your iPhone, it sounds really warm and gorgeous through the valve amplifier. It’s great.

But that used to fascinate me. There was all kinds of stuff there, from Frank Sinatra to Georgie Fame to the Beatles. Just weird bunches of stuff: the Head soundtrack, the Easy Rider soundtrack. Just all those great songs. And some turkeys, things you can’t really explain to other people when you reminisce to yourself. It might mean one thing to them, and you think, well, what’s this crap?