Wes Montgomery’s ‘In the Beginning’ from Resonance Records (Part 2) 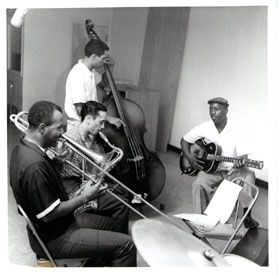 And still there’s more: shortly before his 2014 passing, famed Indianapolis photojournalist Duncan Schiedt contacted Resonance’s Zev Feldman to share news that he had a 1959 recording of Wes Montgomery with the Eddie Higgins Trio. That recording dates from “just before Wes was signed to Riverside,” Feldman says, clearly excited at the prospect of yet more rare and vintage Montgomery. Plans are in development to release those sessions later this year. “and there’s other stuff out there, too,” beams Feldman. “Resonance Records is turning into ‘the house that Montgomery built,’ and we’re really grateful to the family; they’ve been very kind and supportive. Especially Robert Montgomery, Wes’ son.”

The In the Beginning set features more than just those seventeen tracks. “Based on a tip, we discovered a recording session that was in the Sony music archives; Sony didn’t even know about it.” That 1955 session featured five tracks produced by Quincy Jones, likely for use as a demo. 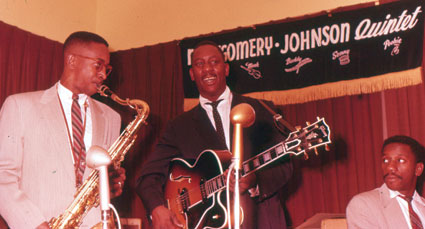 The album offers up even more rarities. A 1957 recording from the C&C Music Lounge in Chicago documents an extended workout of Jerome Kern‘s “All The Things You Are,” and features fiery fretwork from the guitarist. “I communicate with a lot of jazz fans,” Feldman says. “Sometimes those people are tape collectors. I had told this gentleman that I know about the Wes Montgomery project I was working on. And he said to me, ‘Hey, I’ve got a tape. It’s only one track, and it’s from a long time ago.’ He made me swear up and down – and his attorney, too, for that matter! – that I would never reveal his name. And I’ve respect that, because we knew this was an important recording.” Feldman gives great credit to Resonance owner George Klabin for providing the resources for Feldman to go on the hunt for these rare recordings.

“This project started as the Philip Kahl recordings,” observes Feldman.” But it evolved into this early years anthology.” Whenever he thought he’d unearthed all there was to find, he says he’d ask, “What else is there!?” 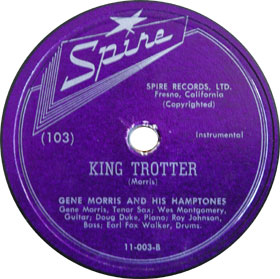 That approach yielded yet another set of rare Montgomery recordings to round out the 2CD set. Three tracks cut in 1949 at Spire Records in Fresno CA display Montgomery and band seething with musical energy. “King Trotter” may be the earliest recording of Montgomery taking a solo. Another highlight of those tapes is “Smooth Evening,” during which Montgomery duplicates Sonny Parker‘s scat vocal. The original records are so rare that United States Library of Congress doesn’t even have copies.

As important and wonderful as the music is, a big part of what makes In the Beginning such a special package is the treasure trove of images, essays and interviews. Feldman even managed to get Montgomery fan Pete Townshend to pen an essay for the booklet. “I grew up listening to rock music like The Who,” Feldman recalls. “My parents played jazz in the house. It was really about musicianship, and soloing, and the expression of ideas. And I had always been in awe of Pete Townshend’s guitar style; he reminds me of a jazz musician.” Feldman enjoyed a Townshend collection released back in 1983, a 2LP set called Scoop. That record included a jazzy instrumental titled “For Barney Kessel.” “So,” recalls Feldman, “I thought, ‘I don’t know for sure, but I’ll bet Pete is a fan of Wes Montgomery, too.” He reached out to Townshend, who was glad to write the essay for In the Beginning in which he relates the story of listening with his dad to an early Montgomery stereo pressing.

Resonance has quite a few upcoming projects of note, including previously unheard recordings featuring organist Larry Young. “Jimmy Smith may have taken the organ out of the church,” Feldman says, “but Larry Young was the one who took it out of this world.” That set of tapes from a French radio archive will be released in late 2015 or early 2016. The label also has plans for release of an series of unheard collaborations between Stan Getz and Joao Gilberto; a set of Thad Jones/Mel Lewis recordings; and some previously-unreleased live recordings of Jaco Pastorius, Sarah Vaughan and others that Feldman isn’t quite ready yet to reveal.

With projects such as these and In the Beginning, Feldman, Klabin and everyone at Resonance are clearly on a mission. “We’re very lucky,” says Feldman. “At the end of the day, we do the best job possible. But we operate differently: our whole function is trying to preserve this music. And I’ve gotta tell you: I’m having fun doing it.”