“Is it comedy?” asks McQueen rhetorically. “Is it music? Is it the weird hybrid cousin of both who is 32 and still sits at the kids’ table during holidays?” The answer to all of those questions is most likely yes. Live dates in cities across the eastern USA in May and June will give audiences the opportunity to decide for themselves (McQueen played Asheville NC on May 21).

Performances by McQueen (Adams) draw deeply on today’s pop culture, and as a result, his humor resonates best with those who have at least a working knowledge of what’s currently popular; put another way, he probably wouldn’t play well in front of an Amish crowd in Lancaster PA. “When I was in the UK workshopping the show I had some ups and downs the first week,” he admits, with a hint of frustration. “Who doesn’t know who Conan O’Brien is? So you run into things going over someone’s head.” But such incidents are the exception, not the rule. “With the constant information we have access to,” McQueen says, “audiences are well-versed” in the pop culture references at the core of his show. 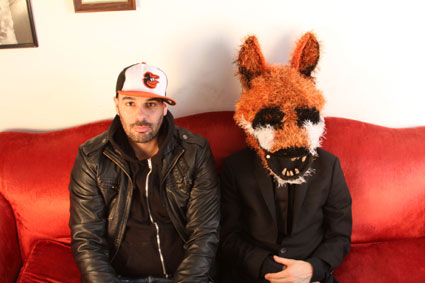 That show incorporates projected visuals, live music performance, and vocal impressions. In both concept and execution, a McQueen performance is consistent with the ethos of sampling. He takes content from a variety of disparate sources, and reprocesses them through his own sensibility, creating something new and unique yet oddly familiar in the process. McQueen describes what he does as combining “parts of movies, songs, and moments [into] a soundtrack for scenarios that didn’t exist and giving them life. He explains, “This show is a culmination of finding a balance of my love of music and my offbeat humor.” And the friends with whom he collaborates in developing the material are “musicians, not comics,” he points out.

Even though it’s more or less a solo performance (“I have a lot of interaction with the fox,” says McQueen cryptically), the show is interactive, involving the audience. “Trial and error is this show’s best friend,” he admits. “Technology is a testy bitch; sometimes you are going to have mishaps, and sometimes it’s spotless.” Further, he notes that the audience is transfixed on the screen, “so I can definitely hide out during the show” if needed. The show’s elements of the unknown are an asset, not a liability. “I think the ability to improvise and move on the fly is what makes this show what it is,” he says.

The limited amount of traditional storyboarding and choreography means that there is plenty of space in a McQueen show for spontaneity. “It’s a constant evolution,” he says. “It’s a lot like songwriting. I work on a piece and I always want to add to it.” He admits that while parts of the show are loosely scripted, it’s “also is heavy on improvisation.” He laughs, “Like a guitar solo that goes ten minutes too long.”

For those who still wonder what a McQueen show is like – it’s definitely not traditional brick wall and bar stool stand-up, and it’s not exactly a concert – he offers a pop culture point of reference. “It’s been compared to watching Adult Swim Live.” He says that reviews of his shows in England sometimes likened him to The Mighty Boosh, “but I think that was out of how different the show is.” McQueen has an ace in the hole for making sure that his audiences don’t get too lost among the media culture references. “That’s why I have a cat in my show: everyone knows what a cat is.”