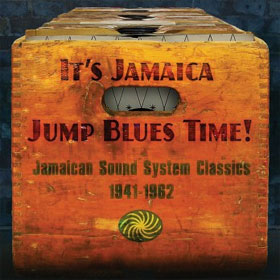 For American readers and listeners, this new compilation from Fantastic Voyage requires a bit of background; when I first laid eyes on it, I had no clue as to either its contents or its overall theme. But thanks to the set’s excellent liner notes (courtesy of Phil Etgart), It’s Jamaica Jump Blues Time! Jamaican Sound System Classics 1941-1962 makes all kinds of sense.

Though it’s situated about six hundred miles south of Miami (off Cuba’s southern coast) The Caribbean island country of Jamaica is a Commonwealth realm of the United Kingdom. As a result, its cultural ties to Great Britain are strong and deep. That explains the relevance of a Jamaican-themed album to a London-based record label. But is the music on this set from Jamaica?

Well, yes and no. And mostly no. That’s the part that needs explaining. And while Etgart does so in a clear and concise manner, I’ll try to do so in even fewer words.

In the 1950s, American rhythm and blues – especially the pre-rock’n’roll style we know know as jump blues or shuffle blues – was a huge sensation. But record imports to Jamaica were nearly nonexistent. To fill the need, a class of disc jockeys rose up on the streets of Kingston and other Jamaican cities. With lorries (in the USA we call ’em trucks) fully kitted out with massive loudspeaker systems – the likes of which would still impress today – the deejays’ mobile sound systems provided the soundtrack for outdoor dance parties. Dancing in the street, indeed. These enterprising deejays engendered fierce rivalries, with each vying for the biggest, best system and – more importantly – the best new music.

So these businessmen/entertainers established contacts within the USA to provide a steady stream of new product, of new and exciting music. But that’s not all they did: they went to great lengths to make sure nobody else could horn in on their territory. They achieved this through several methods of varying degrees of shadiness. First, they’d scratch off the labels of the discs, so if anyone caught a look at them, they wouldn’t know who the artist was or what the name of tune was. They’d go on to re-title the song when announcing it. And if all that weren’t enough, if a particular song really caught on, they’d go to a local pressing plant in Jamaica and have a stack of pirated versions – with new title and perhaps even new (nonexistent) artist noted on its label (if any) – which they’d go on to sell to hungry music fans.

It’s Jamaica Jump Blues Time! collects the best-loved songs from that era in Jamaica, and presents them with proper annotation and credits. So eighty-four songs across three discs cover American r&b, but through the sensibility of a Jamaican listener. Got it? Okay. Now, if you like, forget all of that and focus instead on the music without that Jamaica-centered context.

What you have is a superb three-disc set of American jump blues and r&b covering the early 1940s through the era right before the British Invasion began. Early sides from Louis Jordan, Lionel Hampton, Memphis Slim, Joe Turner and Wynonie Harris make up a good bit of the first disc. The second disc covers the first half of the 1950s and features Jimmy McCracklin, The “5” Royales, The Penguins, Johnny Ace, Smiley Lewis and more. And the third disc (covering 1955-1962) focuses on “the big three” American labels, with artists like Fats Domino, Lowell Fulson, Ernie K. Doe, Huey (“Piano” Smith) & Jerry, and Bill Black’s Combo. It’s safe to say that there are no weak tracks among the seven dozen cuts on the set.

The sound quality is generally superb, though there are a few scratchy tracks, likely “needle drops” from rare 78rpm discs. The historical value of those tracks – not to mention their musical appeal – make those flaws worth overlooking. And for those who discover the delights within, there’s further good news: It’s Jamaica Jump Blues Time! is the fourth in a series from Fantastic Voyage, the other collections again focusing on tunes popular in Jamaica between the mid 1940s and the pre-Beatles era.

Staying with the Jamaican connection for a moment, if you will. The American music on this set, heard as it was by a generation and more of Jamaican listeners, greatly influenced their indigenous music. While American listeners weaned on such greats as Louis Jordan and Joe Liggins would go on to develop what we call rock’n’roll, the Jamaican perspective on the music led to bluebeat, which as Etgart reminds us, led to ska and then inevitably to reggae. So while reggae might still sound alien to American ears – or at least unconnected to our rock tradition – in fact its roots come from some very similar places. For that reason alone, It’s Jamaica Jump Blues Time! is relevant and important. But however you approach it, it’s an essential collection of music.

(Note: there’s also an abbreviated 2LP set of the same name; it collects 28 of the best tunes from the 3CD version.)