Continued from Part One...

The early Moody Blues certainly deserved better success than they found. Their lack of chart action was certainly a factor in Denny Laine‘s departure. But during his time with the group, The Moody Blues recorded enough material for another album in a pair of sessions (one day in July 1964 and then a string of dates between April and September 1966, with Denny Cordell in the producer’s chair). Those previously unreleased sessions form half of the new The Magnificent Moodies set’s second disc.

An almost painfully slow reading of “Go Now” serves to point how right a decision it was to record and release the faster version we all know. The bits of studio chatter are fun for those (like myself) who enjoy studio outtakes and such, and remind listeners that in those days, a band tended to play their live set, live in the studio, for recording sessions with minimal overdub.

A quite bizarre reading of the 23rd Psalm is one of this new box set’s great finds. Arranged by the entire group, the song finds Ray Thomas singing in a vaguely Elvis balladeer style while the band provides vocal accompaniment and some vaguely Merseybeat musical backing. Then the song lurches unexpectedly into an upbeat “negro spiritual” arrangement, replete with handclapping. Talk about stylistic left-turns; it’s easy to understand why this track was left in the can for decades, but it’s an interesting curio to be sure. 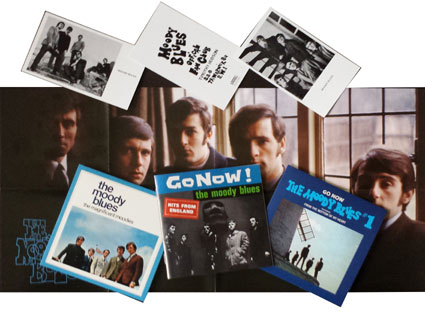 The BBC Saturday Club tracks remind listeners yet again that The Moody Blues were a tight, impeccably rehearsed outfit; the BBC versions differ little from their official counterparts. Clearly they were given little time in the studio for either situation (Decca or BBC), but their songs and arrangements didn’t seem to require more time or effort than was given/spent. “From the Bottom of My Heart” showcases Mike Pinder‘s piano and Thomas’ flute. While enjoyable, the group’s reading of Rufus Thomas‘ “Jump Back” is perhaps the least-convincing of their r&b excursions; likely part of their live set, no Decca studio version of the tune exists.

A pair of tries at Tim Hardin‘s waltzing “How Can We Hang on to a Dream” again lead (in context) to the later Moody Blues sound. And while neither “Jago & Jilly” nor “We’re Broken” rank as a lost classic, they do feature the closest thing to guitar riffage as one is likely to find in the early Moody Blues catalog. Those two tracks are also much closer to the rock-leaning side of later Moodies, having almost completely shed any rhythm and blues trappings.

Pinder’s barrelhouse piano is the centerpiece of his “I Really Haven’t Got the Time,” a chirpy number that wouldn’t have been out of place in the crowded UK charts of early 1967. “Red Wine” suggests what The Who might have sounded by had they been led by a pianist instead of a guitarist.

The set’s third version of “This is My House (But Nobody Calls)” is the best, both in terms of recording (it’s in stereo) and performance, and it wraps up the 2CD The Magnificent Moodies in style. The entire set is housed in an attractive, study and colorful box; both CDs are packaged in LP facsimile sleeves with color artwork. A 24-page booklet is stuffed with discographical information, informative essays and great photo memorabilia. A handful of reproduced fan club handbills and a large, foldout full-color poster will remind music fans of a certain age of rock’s golden days when every album seemed to come stuffed full of relevant (if extramusical) goodies. Taken as a whole, The Magnificent Moodies is an essential purchase for fans of British sixties pop, as well as for those who love the Days of Future Passed-and-onward lineup of the group but remain interested in from whence the group came.