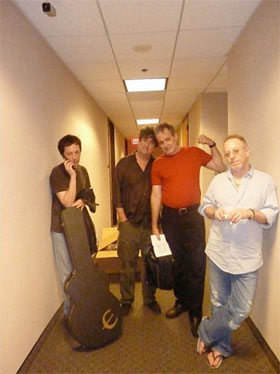 “When you’re working with a producer like David Kahne or Ed Stasium, they care about the process, too,” Steve Barton notes. “Everyone has an interest in how the final record is going to sound. So it’s all of a piece: the punkier stuff on the demos, and how the records ended up sounding.” There are any number of approaches a band can take in the studio. One is to attempt to capture a performance that more or less captures and documents the group’s live song. Another is to employ a studio-as-instrument philosophy, crafting a work as you go along. Barton believes Translator did both. “On the first album, Heartbeats and Triggers, we were trying to capture ourselves live, but then we would do a few little [studio] touches here and there. On the second album [1983’s No Time Like Now], we purposely wanted it to be more ‘produced.’” Barton says that the group liked some of the “production qualities” found on classic albums by the Beatles, the Rolling Stones, and The Kinks. They modeled their approach on those records. “If we could have afforded it,” he laughs, “we probably would have put flutes and strings on some of the songs.”

Barton continues a chronology of Translator’s albums and the aesthetic mindset for each. “With the third album [1985’s self-titled release], we wanted to do something a bit more stripped-down. And then with the fourth album, we again wanted to capture ourselves live.” In fact, the original idea for Evening of the Harvest was to record the songs live in the studio. “I like all of the albums, “Barton says, “and we never wanted to make them all sound the same, anyway.”

Shortly after the release of their second album, Translator issued a three-song 12” EP called Break Down Barriers. That disc featured a cover of a very early Beatles song – in fact, the only composition credited to George Harrison and John Lennon – called “Cry for a Shadow.” In 1983 the Beatles Anthology project remained off in the distant future, so the song was little known outside the cadre of Beatles fanatics. Barton was just such a fanatic. “We were a trio in L.A.,” he recalls. “and a friend of ours was getting married. We were going to play at her wedding. And another band was going to play there as well. The guitar player in that band was Bob Darlington, who later would be my Translator brother.” At one point, the groups decided that they should play something together. “I don’t know how we ever came up with ‘Cry for a Shadow,’ but obviously it was on all of our radars.”

Barton had grown up with the song. “As a little kid, I remember calling a radio station in Los Angeles.” Affecting a child’s voice, Barton continues. “’Hi! Can you play The Beatles’ “Cry for a Shadow”?’ I don’t know how they did it, but [the deejay] hung up the phone, and the song started. So the song came naturally to us, especially with the two guitar parts.” And once the group became a four-piece, the song was part of their set.

But Translator has always been mostly about original songs. Though guitarists Barton and Darlington both compose prolifically for their band, they only rarely write together. Yet Barton insists that there was never a sense of competition between the two songwriters. “If there is any competition,” Barton says, “it’s healthy. Especially for the third and fourth albums, we had this spurt of songwriting. I had a little room in my flat in San Francisco where we’d write. Bob would come over, and he’s say, ‘Look, I have these four songs.’ And they’d be really good. So I’d say, ‘Oh, I’d better write some more, too.’ We kind of sparked off of each other.” He says that “the handful of songs that we wrote together came out of jams.” 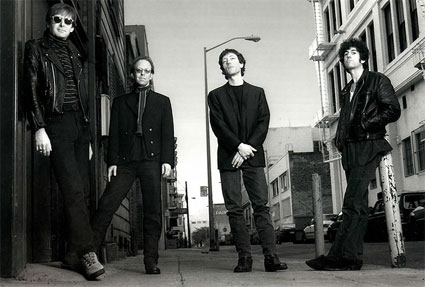 Barton is initially lost for words when asked to characterize the differences between his songwriting and that of Robert Darlington. After considering the question, he says, “I know that when Bob first came to the band, one of the songs he brought to our set was ‘Pablo Picasso’ [by The Modern Lovers]. And he knew all of the John Cale stuff; Paris 1919…he turned us on to all of that. I had mostly known Cale as part of the Velvet Underground.” That music informed Darlington’s songwriting, Barton says. “Bob has always been willing to really embrace the idea” of just using a couple of chords in a song. “I tend to write like, here’s a verse, chorus, and bridge. So I think we have unique styles that really complement each other.”

That contrast between Barton’s music and that of his fellow guitarist was placed in stark terms via a production choice the band made for Evening of the Harvest. Barton’s guitar parts on the record are all hard-panned in one stereo channel, while Darlington’s guitar is panned to the other. For his part, today Barton doesn’t remember why the band and producer Ed Stasium did that, but he thinks he might have been influenced by Neil Young and Crazy Horse employing that approach on one of their records.

All four of the group’s 1980s albums have in fact been reissued in the 21st century. “About eight years ago, maybe,” Barton says. But those Wounded Bird reissues were widely criticized for their subpar sonic quality. Diplomatically allowing some level of dissatisfaction with the quality of those CD reissues, Barton says, “That’s something I’d like to revisit, eventually.”

Meanwhile, Sometimes People Forget is a worthy addition to Translator’s recorded legacy. A number of bands that rose to fame in the 1980s have seen retrospective releases of their material on Omnivore Recordings: Jellyfish, Game Theory, The Posies, and Trip Shakespeare are only four of many. “I’d love for Sometimes People Forget to be the beginning of a relationship with Omnivore,” Barton says. “We’ll see how it goes.” Translator are doing a number of shows in May to promote the release – dates in Los Angeles, Long Beach, and, of course, San Francisco – and post updates on their site, translatormusic.com.