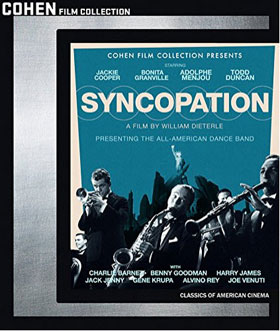 Spend any time reading online forums discussing what currently-unavailable motion pictures deserve a proper reissue/restoration, and you’ll likely come across the title Syncopation. This 1942 black-and-white film is at its heart a conventional love story – in fact one with little conflict – but it has gone down in history as a legendary title thanks to the setting of that story, and to some noteworthy guest stars.

By then a young adult, former child actor Jackie Cooper is the leading man in this tale of a young woman (to be played as an adult by Bonita Granville) named Kit, born and raised in dawn-of-the-20th-century New Orleans. To the (mild) consternation of her (presumably widowed) father (played by Adolphe Menjou), piano-playing Kit has developed a deep love for jazz. The son of Kit’s nursemaid/nanny is a young African American boy of her age (played as an adult by Todd Duncan), who discovers that though his “unschooled” musical approach won’t get him anywhere in formal musical studies, it gets him a good jazz gig.

After father, daughter and nanny relocate to Chicago (and the calendar flips over a decade or so), Kit wanders out one night, meeting a young man (Cooper) on the sidewalk. The two wander into a rent party, where Kit hears another kind of music that stirs her soul. It’s not quite like New Orleans jazz, but it’s jazz all the same. Mild hilarity ensues when Kit takes over on piano, causing a riot that eventually lands her in juvenile court. (She gets off scot-free after an impromptu performance that sets the jury’s feet a-tapping.) 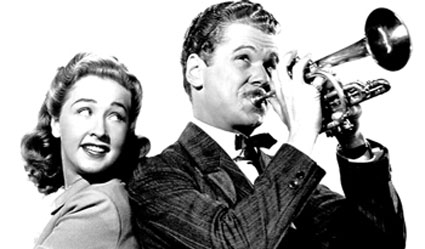 The breezy, lighthearted story takes a few additional twists and turns, and ends on a predictably happy, hopeful note (this was ’42, after all). But the setting for the decidedly lightweight (if well-acted) story is what makes Syncopation noteworthy. Starting with a wordless montage of scenes that show African villagers being sold by their leader into slavery, Syncopation sets out with no less a lofty goal than to chart the development of the American musical form of jazz. That it manages to do so within the context of a pop culture romance film is nothing short of extraordinary. And – as modern-day audiences will surely take note – the film treats African Americans in a manner not often seen onscreen in that era, especially in a film populated by plenty of white actors.

No, lifelong friends Kit Latimer and Rex Tearbone never embrace upon meeting, but their arms’-length friendship is nonetheless palpable, without even a whiff of white-over-black superiority. Even Rex’s mother’s character (the nanny) is portrayed in what by 1940s standards must have been a very dignified manner. Black and white characters almost (but don’t quite) mix onscreen, yet there’s a sensibility throughout Syncopation that seeks to depict African Americans as different but not in any way inferior to their white counterparts. And the film all but insists that the music favored by the black musicians (and, to his credit, Cooper’s Johnny Schumacher) is better than the stiff white pop music. 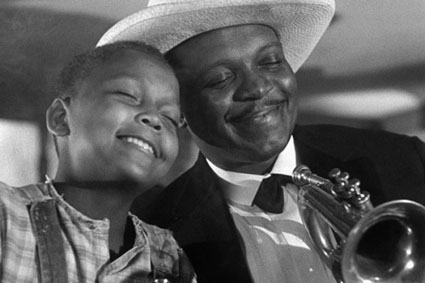 One of the film’s most effective moments is the scene in which Johnny finds himself frustrated playing regimented, dull classical music as part of a large ensemble. He stares at the sheet music in front of him, and (in a sort of dream sequence), the staves and notes become three-dimensional, with Johnny helplessly entwined inside them, like an animal gored on a barbed-wire fence.

Syncopation was (and is) billed for a lineup of “stars” that is billed collectively as the poll-winning All-American Dance Band. Their all-music, no dialogue, no-acting sequence is tacked onto the film’s end, and has little if anything to do with what has come before. And though it’s quite brief, it remains worthwhile. The band includes manic, show-stealing drummer Gene Krupa, clarinetist Benny Goodman, trumpeter Harry James, saxophonist Charles Barnet, and even steel guitarist Alvino Rey.

The restored film print for the 2015 Blu-ray reissue of Syncopation is stunning in its clarity; the visual detail is staggering. A very few scenes (totaling well under a minute) seem to be sourced from a lower-quality dub, but most viewers won’t notice, instead focusing on the rich visual detail and the superb sound. The latter is equally important, because while Syncopation isn’t really a musical (although Connee Boswell does burst into song near the film’s close), it’s chock full of music.

Director William Dieterle‘s Syncopation sets a high standard for the care in which older films should be brought to modern-day audiences. A delightful little film that has more on its mind that the main plot would suggest, Syncopation is recommended viewing for anyone with at least a passing interest in jazz.