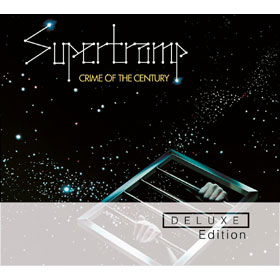 Among fans of progressive-minded 1970s rock, Supertramp have rarely gotten a fair shake. And the reasons are difficult to discern. Could it be the high-pitched lead vocals of co-lead singer Roger Hodgson? That’s doubtful; many prog fans took a strong liking to Jon Anderson‘s upper-register vocals in Yes (and please don’t get me started on Geddy Lee). Could it be the fact that Supertramp scored some Top 40 hit singles, most notably during the Breakfast in America era? That’s more likely to have been a factor, one potentially damaging their prog street-cred.

But their music remains. And once the group found their musical footing (though good, their earliest albums find them struggling for a defined sound), Supertramp produced some of the finest and most accessible prog-leaning “album rock” of the 1970s. And their high water mark came with their third LP, 1974’s Crime of the Century. By that point in the band’s career, all of the musical pieces of the puzzle had come together effectively. With a pair of singers (guitarist/keyboardist Hodgson and founder/keyboardist Richard Davies), neither of whom greatly enjoyed the spotlight(!), onstage the band’s spokesman and focal point was sax/reedman John Helliwell. The disparate influences upon the two primary songwriters (Hodgson and Davies) might have given the group’s sound a split personality, but somehow the two blended effectively.

Crime of the Century sports one of the era’s most seamlessly effective first sides. One wonders if the atmospherics that open “School” impressed Roger Waters; with a schoolyard scream leading into the song, “School” presages a similar approach used on Pink Floyd‘s “Another Brick in the Wall (Part Two),” a centerpiece of The Wall, a 1979 concept album with not-dissimilar subject matter. And the song’s dynamics – especially the slow-burn buildup to the delightful electric piano solo – are nothing short of thrilling.

“Bloody Well Right” is the earliest among the band’s well-known songs, and was released as a single (U.S. #35), but even it is a bit “progressive” for the singles charts. While the chorus is pretty well a singalong, the power-chording verses are another thing entirely.

“Hide in Your Shell” is this writer’s all-time favorite Supertramp song. Combining all of the sonic elements that make the band special, the melancholy yet uplifting lyric is a thing of beauty. And a good portion of its run time (nearly seven minutes) consists of hypnotically repeated musical motifs. Saxophone – an instrument with a mixed pedigree as part of a progressive rock lineup — is used to exceedingly good effect here and throughout Crime of the Century. Side One ends with “Asylum,” a lament that’s (again) melancholy, but that also possesses the widescreen grandeur one might expect to find on a Queen album of the era.

It would be difficult to top the first side of the album, and Side Two doesn’t really do that. But it’s effective enough, and carries forth the aesthetic established in the album’s first half. “Dreamer” kicks things off with its memorable and insistent Wurlitzer electric piano. In fact, “Dreamer” was the first single released off of Crime of the Century, but it failed to dent the charts in the USA (it reached #13 at home in the UK). But the determination that “Dreamer” was a commercially viable track wasn’t exactly wrong; it was simply a bit ahead of its time: a live version of “Dreamer,” released as a single off of 1980’s Paris, reached #15 on the American charts (and #1 in Canada).

“Rudy” is another melancholy number, providing contrast with the side’s opening cut. With Davies’ plaintive lead vocal and soulful, nimble acoustic piano work, the tune might remind some of Billy Joel at his best. The contemplative ambience continues with “If Everyone Was Listening,” another piano-led number that has a feel not completely removed from The Beatles‘ “Fool on the Hill.” As the song progresses and instruments are added, the arrangement unfolds into something quite lovely.

Back in the 70s, artists didn’t feel the need to extend their albums to eighty minutes; the album closes with the title track, a melodramatic number featuring arrangement and production flourishes that recall/foreshadow Bob Ezrin‘s work for Lou Reed, Alice Cooper, and…Pink Floyd’s The Wall. (Crime of the Century was in fact ably produced by the estimable Ken Scott with the band.) Some lovely twin lead guitar work – a feature not in great supply on this keyboard-centered album – is a nice touch. The track’s soaring string arrangement is the cherry on top.

The 2015 Deluxe Edition of Crime of the Century includes the original album in a digipak that features an excellent and lengthy liner note essay by Mojo editor-in-chief Phil Alexander. And a bonus disc provides an audio document of a March 1975 Supertramp concert in London. The live disc serves to illustrate a couple of key points about Supertramp of that era. One, they were very, very good live onstage, succeeding at recreating the sonic landscape of their studio album with only their five-piece lineup. And two, Supertramp had some seriously high-caliber live sound reinforcement. The mid 1970s are not remembered as a golden era for live concert sound, and the subtleties of electric and acoustic pianos, saxophones, harmonicas and the like could often be lost onstage. But not on this night, and not with this band.

The concert as presented here includes the entirety of Crime of the Century, played start to finish in order, with five additional songs inserted in the space where home listeners would have flipped over their vinyl LP. All of these (save an impromptu reading of “A – You’re Adorable”) would appear on the group’s next album, Crisis? What Crisis?, released six months later, but at this stage they most likely had not yet been recorded in any form.

Sometimes Deluxe Editions offer up little in the way of an upgrade over the original release. But Supertramp’s Crime of the Century: Deluxe Edition effectively supplants earlier releases of this classic album, and is recommended in the strongest terms.