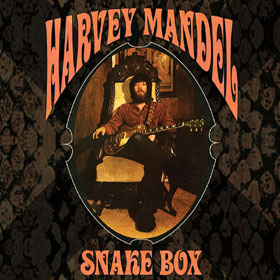 Meaning absolutely no disrespect to the artists to whom I refer, the music scene of the late 1960s and early 1970s was filled with what one might call second-string guitarists. These guys (and at this point in history, nearly the entire roster was male) weren’t on the notoriety level of Jimmy Page, John McLaughlin, or Eric Clapton. But at their best, they were as good, even if their music was known (much less heard) by fewer listeners. Some of the names that come to mind include fusion great Larry Coryell; three of pre-pedestrian Fleetwood Mac‘s guitarists (Peter Green, Danny Kirwan, Jeremy Spencer); and Canned Heat‘s Harvery Mandel (I am certain readers can think of many others).

Alongside his work with Canned Heat (he was a member of the group’s “second classic” lineup circa 1969-1970, and rejoined briefly on several later – and less noteworthy – occasions), Mandel maintained a solo career. Between 1968 and 1972, Mandel released six solo albums. Five from this period – all but the ’72 release Get Off in Chicago – have now been released in a set titled Snake Box (Mandel’s nickname is “The Snake”). While all of the original vinyl albums (Cristo Redentor from 1968, Righteous from 1969, 1970’s Games Guitars Play, 1971’s Baby Batter, and The Snake from 1972) can still be acquired for small sums (i.e. often under $5), none of the albums has had a recent CD/digital release. So the new box set presents them all together, each housed in an LP reproduction style sleeve, in one tidy package.

Mandel was and remains a guitarist of great versatility, and one with a wide stylistic vision. Nominally a blues player, he sounds comfortable in any number of musical idioms. Widely recognized as an originator of the two-hand tapping technique (see also: Eddie Van Halen and Stanley Jordan), Mandel sounded as comfortable playing jazz-inflected licks as he did within the context of blues (or blues rock).

Mandel’s ability to trade in multiple styles resulted in albums that could seem all over the place. His interests and influences on these disc are so vast that it’s quite difficult to pin down a Mandel style. As often as not working with an ensemble, Mandel created albums that were cohesive wholes, not merely showcases for his guitar playing. For example, the first track on his first album, the title track of Christo Redentor, features a wordless female soprano vocal that sounds eerily like a Theremin. And the track’s lush string arrangement (complete with harps) is pretty well outside the rock idiom. From there Mandel left-turns into “Before Six,” a tune that anticipates early Blood, Sweat and Tears, and sounding not unlike The Paul Butterfield Blues Band crossed with, say, Cold Blood.

For those who haven’t heard Mandel’s solo work, the nearest artist to whom he might be compared is Shuggie Otis, another musician of singularly wide musical vision. Mandel’s playing is often exciting, featuring thickly sustained notes that are both economical and expressive at once. For his albums, he enlisted some legendary talent, including Graham Bond, Larry Taylor, Eddie Hoh, Pete Drake, and Emil Richards (to name but a few). Vocals show up occasionally, but Mandel seems to understand his strengths (and they are many), sticking to those.

Dave Thompson‘s liner note essay is informative, but the reader may be left wishing the box’s producers had given him more space. But that’s really a minor complaint, as the music on Snake Box largely speaks for itself. Snake Box is a treasure trove of heretofore underappreciated gems. Harvey Mandel is an artist who starts with blues and then pushes far beyond the supposed boundaries of the genre. Those receptive to such an approach are well advised to dive into this box set.