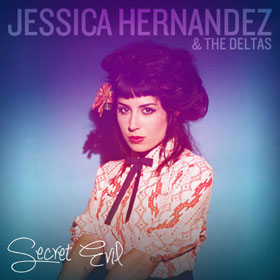 It’s easy – too easy, in fact – to note that on Secret Evil, Jessica Hernandez & The Deltas sound a good bit like Amy Winehouse. Yes, there are similarities in both vocal style and instrumentation. But the comparison underestimates the strength and originality of Hernandez and her music.

The Detroit-based vocalist paid some serious dues to bring Secret Evil to the musical marketplace; originally signed to Blue Note, she recorded an album that ended up in the musical equivalent of what the film industry calls “turnaround.” Put simply, it never came out on Blue Note. Eventually she freed herself from the contract, released a EP, and now we have the first full-length from Hernandez and her band.

“No Place Left to Hide” has hints of KT Tunstall‘s early style, albeit with soulful backing from a full band. It’s a strong opening track for an album, but it’s eclipsed by the classic-to-be, “Sorry I Stole Your Man.” Equal parts trash-talking swagger and coyly knowing giggle, the song has everything a hit ought to have: great vocals with memorable “Ah-ooo” lines, solid musical backing with plenty of hooks, some subtle acrobatics from the players (check the descending organ line in the chorus) and a punchy mix.

Hernandez is equally effective turning out torchy, romantic numbers like the contemplative “Cry Cry Cry,” in which the singer shows off her precise vocal control. And she does it without the all-over-the-scale showoffy melismas so common to female pop singers. When Hernandez reaches for the upper register, she makes it sound like the most effortless thing in the world. She sings like most of us talk.

“Dead Brains” weds an effects-laden electric guitar figure to a pop-centric arrangement. The upbeat melody is almost bubblegum, but The Deltas’ arrangement gives it a harder edge, providing an effective backdrop for the lyrics-heavy track.

The band is strong and assured throughout the disc’s eleven cuts, and The Deltas manage to sound like a cohesive band rather than a group of musicians backing a singer. Hernandez’s vocals augment the instruments, and vice versa. The bridge of “Tired Oak” evokes a carnival carousel, but does so in an understated way. The track’s dynamics are emblematic of a group that sounds like they’ve been together for ages.

In “organic” styles of music, synthesizers must be used judiciously; otherwise the tunes can end up with a sterile, assembly-line feel. The synths (or treated guitars; it’s tough to tell which) on “Over” enhance the melody without overwhelming it.

On “Caught Up,” The Deltas open with a familiar drum pattern that gives way to a rocker. For those who fell in love with “Sorry I Stole Your Man,” this track may well be your second-favorite track on Secret Evil. It’s cut from similar musical cloth but isn’t a “Sorry” rewrite. The shifts in dynamics – and the great guitar solo – are thrilling, and a bit reminiscent of fellow Detroiters Dirtbombs.

“Neck Tattoo” – a rumination on romance and regret – affects a musical arrangement that feels film-noir-ish, and it curiously evokes some of John Lennon‘s better mid 1970s work. “Run Run Run” has an odd ambience that seems to combine a gypsy jazz feel with elements of techno, though it really doesn’t sound like either of those things.

Some clever horn charts enliven “Downtown Man,” a track in which Hernandez continues to demonstrate her skill at jumping vocally around the scale without distracting from her lyrics.

Jessica Hernandez & The Deltas choose a melancholy, low-key number to close out Secret Evil. “Lovers First” has a late-night, low-lights vibe. Restrained musical accompaniment from The Deltas showcases a vocal that’s both subtle and dazzling.

As a whole, Secret Evil is as impressive a debut long-player as I’ve heard from a vocalist (and her band) in some time. Recommended.