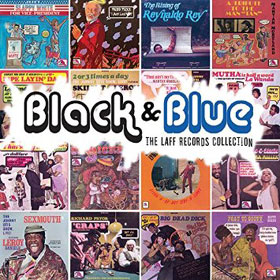 A new 4CD collection of vintage comedy records, Black & Blue: The Laff Records Collection exemplifies the abbreviation NSFW (“Not Safe for Work”). The low-budget stand-up comedy records (usually but not always recorded in front of raucously appreciative audiences) released on the independent Laff Records label in the 1970s were a sensation in African American communities across the USA. But to buy these records, you had to know whom to ask: titles like Eatin’ Ain’t Cheatin’ by Wildman Steve simply couldn’t be put on prominent display in a record store.

The story of Laff Records is a sort of underground, sub- or counter-cultural history. The labels’ so-called “party records” were put together using the smallest of budgets – the cover art is often amateurish, and the recording techniques won’t win any audio awards – but then those measures completely miss the point. These extraordinarily “dirty” records featured the likes of Redd Foxx and Lawanda Page, both giants in the black standup comedy world. The public at large knew Foxx as Fred Sanford on the hit TV sitcom Sanford & Son; they knew Page, too, as Aunt Esther, the uptight sister-in-law of the main character. But TV viewers would be shocked (shocked, I say) to hear Page on record, on her Pipe Layin’ Dan LP. There she runs through routines with titles like “Bustin’ Cherries” and “Douche Powder.” Needless to say, as with most Laff Records titles, Page’s LPs were not for the easily offended.

But there’s an undeniable (dare I say) charm to be found in routines like Jimmy Lynch‘s “Tricky Dick & Pussy,” Dap Sugar Willie‘s “Duck You,” and Mantan Moreland‘s immor(t)al classic, “That Ain’t My Finger.” And while this caucasian writer can merely hazard a guess here, one suspects that there was a certain degree of liberation at work, an I’ll-say-anything-I-want mindset that was, in its own way, empowering to both the comics and their (almost wholly black) listening audience.

To this day, original Laff Records are fairly difficult to come by; seemingly they’ve all been melted in conservative church bonfires, or (more likely) they’re hidden away in the collection of now-aging African Americans (note to self: hit some nearby intown garage sales this coming spring). Ten or so representative titles from the Laff catalog are now collected on this new 4CD set. Robert Townsend‘s brief essay helps modern listeners understand the debt that today’s black comics owe to these underground party records. And a richly detailed booklet provides biographical and contextual information about the performers and their recordings. There’s no Richard Pryor material here (though Laff released several Pryor discs, the man’s relationship with the label was contentious), but the lesser-known names make their raunchy mark nearly as well. With Black & Blue: The Laff Records Collection, Rock Beat Records are once again to be commended for their edgy (if limited-appeal) approach to compilations and reissues.