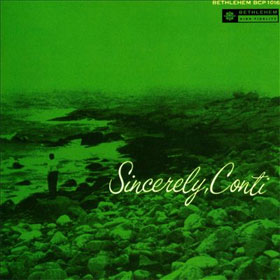 This is a straight CD (and vinyl) reissue of a 1954 jazz date featuring the recorded headlining debut of trumpeter Conte Candoli (though curiously, the album cover – also a straight reproduction of the original – spells his first name wrong. Candoli leads an energetic quartet – lots of showy drum work here, courtesy Stan Levey – through an uptempo selection of tunes. Candoli and band are interpreters of the work of others; here you’ll find lively readings of numbers from the Gershwins along with other standards. It’s another high quality Bethlehem reissue from the Naxos folks; collect ’em all!