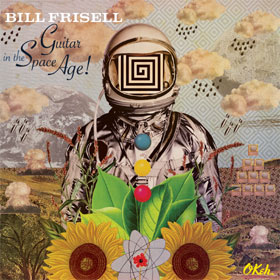 Bill Frisell – Guitar in the Space Age!
Here’s some free advice: don’t get into a discussion with a hardcore fan if you’re underwhelmed by their hero’s latest album. I made that mistake. Though the guitarist is widely revered for his work in countless styles, here he traffics in what I would have to call “easy listening.” Frisell covers songs that have influenced him, and while he does so in note-perfect fashion, his arrangements are…inoffensive. Frisell’s playing can be mightily exciting when he wishes it to be; on this outing, that goal seems to have been far from his mind. Excellent for what it is, yet somewhat dull.