A Career in FLUX: The Adrian Belew Interview 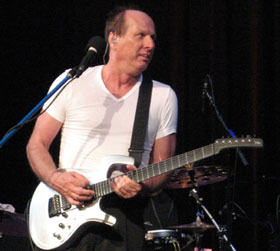 The music of electric guitarist Adrian Belew is tough to pin down, and he prefers it that way: “I don’t like to put titles on any of these brands of music,” he says. People like to have them, “But for the people making the music, it’s better not to have them.” Fine: if you’re not familiar with Belew’s music, perhaps a rundown of some of his more well-known credits will help: he’s toured and/or recorded with Frank Zappa, The Bears, Talking Heads, Nine Inch Nails, Tom Tom Club, and David Bowie. And for many years (1981-84 and 1994-2008) he played guitar, sang and composed in King Crimson.

But alongside all of those projects, the Nashville-based guitarist has maintained a solo career, and he has nearly two dozen album releases under his own name. Since 2006 he has led a group than fans dubbed The Adrian Belew Power Trio; the current lineup includes Julie Slick on bass, and drummer Tobias Ralph. Belew first learned of Slick while he was teaching a seminar at The School of Rock. “Julie was a graduate of the school,” Belew recalls. “Paul Green, the founder of the school, said, ‘You’ve got to hear these two students of mine.’ So Julie and her brother Eric played together. And that was enough for me!” The siblings rounded out Belew’s new trio; Eric Slick eventually left to join Dr. Dog, and was replaced by Ralph.

Julie Slick’s muscular, inventive playing has earned her critical plaudits, and she came to the widespread notice of King Crimson fans when she toured (with Belew and Ralph) as part of Two of a Perfect Trio, a six-person, three-act concert that eventually became what the King Crimson organization calls a “ProjeKct,” a side-project involving one or more members of Crimson. The TOAPT concert at the Diana Wortham Theatre was a highlight of the 2011 Moogfest.

King Crimson – with more than twenty musicians having passed through its ranks – recently concluded a new tour of its own. Members come, go, and sometimes return, depending on what founder Robert Fripp has in mind at any given time. Presumably, the door is left open for former members to return to the active lineup. “I think that is the way Robert Fripp views it,” says Belew, carefully measuring his words. “I’m not sure it’s the way I view it. I don’t know if there is any future for me in King Crimson. Now that I’ve been sort of outside the band and watched it walk by, I’m a lot less interested.”

With his Power Trio, the man dubbed the Twang Bar King (also the title of his 1983 album), Belew has plenty to hold his interest. Each night on the current tour (which brought them to Asheville’s New Mountain on December 3rd), the three musicians build their pieces based on a new Belew concept he calls FLUX. “It’s the first time we’ve tried this,” Belew explains. “We’re doing things in a different format: sometimes we don’t play the complete songs. We play a portion of them, and they’re interrupted by something, and then we go to the next song. So in our evening of music, we can play something like thirty different pieces.” Belew describes this approach as a “really good way to move the pace of the show, and to give the listener and viewer a look at my whole career.”

The FLUX concept began its life as a mobile app. Belew just completed a successful crowd-funding campaign for FLUX, and the app debuted November 25th. When I try to compare FLUX to previous projects by Todd Rundgren (1993’s No World Order) or Brian Eno, Belew stresses that his project is very different. “This is not computer-generated music,” he explains. “This is music that I make beforehand – hundreds of bits and pieces – and they line up differently with themselves, and with the visuals that accompany them.” FLUX is an ongoing project, and Belew will regularly add more new music into the app. The idea with the interactive FLUX app – and, by extension, the live music of The Adrian Belew Power Trio – is that “music is never the same thing twice. I think that because people process things so much quicker now, the world is ready for this,” he laughs. Asked about his next project after this tour, Belew says that he’s very excited about it, adding, “I’m not allowed to talk about it. All I can tell you is that it involves film.”

An edited version of this feature appeared in the Nov. 26 issue of Mountain Xpress.