Morelouderfastermore: The “Cacaphony” of GWAR

Anyone who’s ever viewed the 1982 film classic This is Spinal Tap will recall the famous “eleven” dialogue between filmmaker Marty DiBergi (Rob Reiner) and Nigel Tufnel (Christopher Guest). Tufnel proudly displays his prized amplifier, kitted out with control knobs that all go to eleven. A puzzled DiBergi asks him, “Why don’t you make ten a little louder, make that the top number and make that a little louder?” Tufnel pauses and blankly replies in a manner that makes clear he believes that he’s putting the question to rest, “These go to eleven.”

GWAR starts at eleven and then goes from there. This Virginia-based collective of artists and creative types set out to create the most outrageous, over-the-top spectacle known to music, and it’s clear that they decided the only way to achieve that goal was to devise a show that incorporated all elements in their most absolutely extreme, and then use that as a starting point. 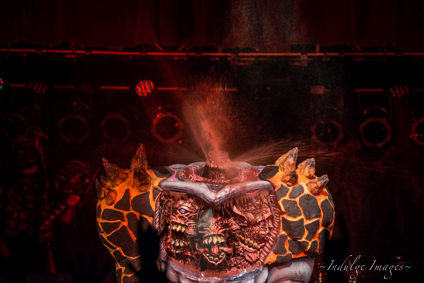 click on image to view larger version
The visuals are arresting: everyone onstage – musicians and actors alike – is clad in costumes that combine those silly Frank Frazetta paintings that one finds on Molly Hatchet LPs with shock-horror elements that might score them points on Syfy Channel’s Face Off. When a character lumbers onto stage, and he (or it) is eight feet tall, the audience just knows what’s going to happen. The fact that a character sneaking up behind him is wielding a medieval armament makes it even more obvious: that head there, it’s comin’ off.

And when the axe swings and the head flies, the audience knows two more things. One, the exposed cut will reveal lot of sinewy, stringy gore. Two, and far more integral to the experience that is a GWAR show, copious amounts of liquid – fake blood or simulated ooze of another variety – will forcefully emanate from the wound. And the villain (or hero) with the axe, he’ll helpfully bend the beheaded creature forward so that the ruddy stream will soak those crowd members foolish (or calculating) enough to have positioned themselves up front. (The merch table doesn’t sell white t-shirts for nothing, I’m here to tell you.)

The thing is, this little vignette isn’t the climax to a performance; no, it’s pretty much how a GWAR show gets underway. It certainly was the night last week that I witnessed the group. And said show ran nearly two hours. On viewing this mock beheading, I wondered to myself (after making sure to duck clear of the spewing liquid, no easy task), “how will they sustain this, much less top it, over the course of an entire show?”

The answer, as I discovered, was simply morelouderfastermore. 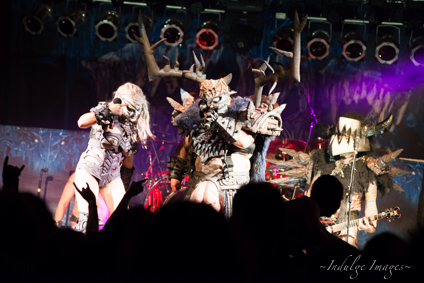 When you begin at your most extreme, there’s really no place to go. But it’s fair to note that neither GWAR nor the audience packed into Asheville’s Orange Peel (Wednesday, December 3, 2014) seemed to mind. The roar of the metal never subsides, the pace never slows, and the spectacle never stops. There are occasional between-song bits of banter, part of a carefully-choreographed story line based around the quest to find their “lost” member, Oderus Urungus (known offstage as Dave Brockie). As the band sings (well, shouts, really) during the interpolation of Jim Carroll‘s “People Who Died” inside of a Pet Shop Boys cover, “Oderus, died, died.” So they never really do find him, but they destroy multi-breasted minotaurs (or something) and hapless security guards along the way.

A non-musician member of the troupe leaps endlessly around the stage, clad only in a leather bondage mask and matching jockstrap, often wielding a weapon that reminds me of nothing so much of a giant, studded version of a pizza wheel-cutter. There is in fact at one point a routine based around pizza, but in general this fellow – Bonesnapper, I think he was – uses his weapon on other “pretenders” to the lead vocal spot in the group. One of them looks like a nightmare version of a Teenage Mutant Ninja Turtle. Another one reminds me of a maniacally laughing Brian Blessed, albeit decked out in antlers and blood-spewing, um, udders. 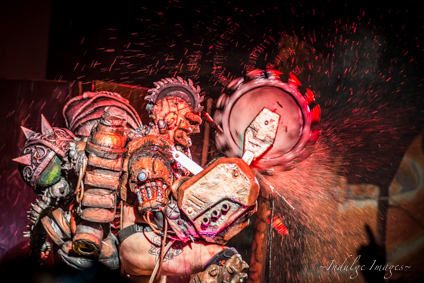 As I mentioned earlier, nobody in GWAR does what most people would consider singing. They shout or scream their chanted lyrics – few of which the uninitiated would be able to discern amongst the din – but hey, if you’re there, you pretty well get the ideas the band is trying to convey. Take the theatricality of The Tubes‘ notorious live shows (albeit with a bit less simulated onstage sex), add a soupcon of Venom‘s relentless metal roar, and use the cartoon kabuki theatrics of KISS as the kernel of an idea, put ’em all together and – yes – turn it up to eleven, and you’ve got GWAR.

One person I spoke to pre-show confided that although she had seen GWAR onstage no less than five times, she couldn’t make serious claim to actually knowing any of their songs, and doesn’t particularly like their music. At first, I was dumbstruck: then why is she here, I wondered? Once the performance got under way, I understood. More than perhaps any other contemporary concertgoing experience, a GWAR show is all about being there. The spectacle, the volume, and the songs about death and hate. It’s all so ludicrously outrageous as to be funny. Very funny, in fact. 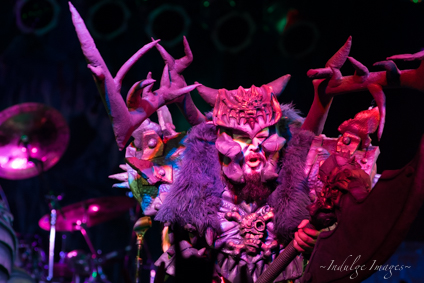 To those who’ve never attended a GWAR show, think of it as sort of a cartoonish dark-side answer to a Flaming Lips show. Instead of having Wayne Coyne up there spouting heartfelt feel-good messages about peace and love, you have instead Pustulus Maximus or Bonesnapper screaming to the audience (affectionately known as scumdogs) something or other about bloodbaths. And instead of Steven Drozd chirping “thank you” in a high-pitched voice, you get the lovely Vulvatron, complete with prosthetic mammaries that – you guessed it – squirt high-velocity red liquid upon the supplicant scumdogs.

In print, I should think this all reads as pretty horrible. And indeed it is; other than a ringing in my ears (even with heavy duty earplugs), I have no distinct sonic memories of the show beyond a ceaseless cacaphony. And that word I used advisedly: on many levels the music was caca, and the violence and mayhem was all phony. Would I go to another GWAR performance? Probably not: one and done, and it’s marked off of my bucket list. But am I glad to have gone? Absolutely: it was all good clean filthy fun, and there really is nothing else quite like a GWAR show.

Here’s some audience video of the show I attended, shot by a brave fellow scumdog. It’s decidedly NSFW, by the way.

Note: I had been set up with a photo pass, and given the standard admonition (“first three songs, no flash”). But I had been given an additional warning, that I should operate my camera from inside a clear plastic bag so as not to see it damaged. In the end I opted to leave my photo gear at home. Instead I proudly and gratefully present samples from the evening courtesy of an honest-to-goodness professional photographer – and a brave one at that – Patrice Kennedy-Murillo of Indulge Images. Forget about bowing to the gods of metal; I bow to Patrice’s peerless photography work, a small sampling of which accompanies this review.