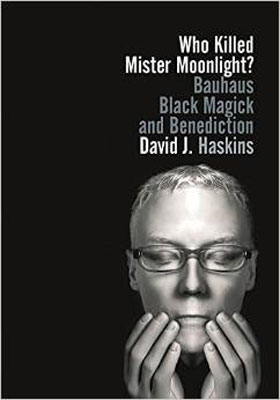 David J (Haskins) came to fame as a member of goth-rockers Bauhaus, and went on to success with Love and Rockets, solo releases and sideman duties with such greats as Jazz Butcher (Pat Fish). Along the way, he experienced and/or witnessed firsthand some great stories. As it happens he is a masterful storyteller, with a keen memory, a self-effacing manner, and a dry wit.

And as the latest happy product of those aforementioned qualities possessed by David J, we have his new book, Who Killed Mister Moonlight? Bauhaus, Black Magick and Benediction. I just finished reading a pre-publication copy of the book, but save for the lack of spine text, UPC and ISBN code, the book seems completely finished and expertly edited. David J. divides his history into three parts: the first (covering 1979-1983) deals with the back story, formation and quick rise of Bauhaus, the group most well-known for “Bela Lugosi’s Dead.” Here David J guides the reader through the early days of the band, highlighting the very collaborative creative process through which they created some highly-regarded albums.

And there are plenty of hints – foreshadowing, really – of the problems that would eventually engulf the group. Though David J was not the band’s putative “leader,” his role was clearly greater than might have previously been suspected. Erratic, idiosyncratic, enigmatic, mercurial: those are all adjectives (mine, not David J’s) that could well be applied to Bauhaus front man/singer Peter Murphy. Though Haskins never says so – in fact, I suspect he doesn’t even think so – the evidence suggests that Murphy’s primary contribution to the group may have been more stylistic and sartorial than musical.

The second part covers a much longer span of time: 1984-2004. This period saw Bauhaus splinter, with Love and Rockets rising from the debris. And while Bauhaus would reform (and attempt to reform) multiple times, Haskins’ other activities – musical and otherwise – are of equal interest. Again with the foreshadowing, the author hints at his growing fascination with the occult. And eventually he gets right into it; those chapters are among the book’s most lurid, downright weird, and yet quite fascinating.

The third section of Who Killed Mister Moonlight? concerns itself with the period 2005-2006, the time during which Bauhaus mounted its highest-profile reunion to date. By David J’s recounting, we shouldn’t look for a future Bauhaus reunion, but his other ventures are creatively rewarding enough that he’s worth keeping an eye on nonetheless. It might have been interesting had Haskins spent a bit more time discussing his musical adventures outside of Bauhaus and Love and Rockets, but it seems clear that Who Killed Mister Moonlight? places the focus where the author wants it to be. Overall, it’s a compelling read, with just enough celebrity run-ins to make it worthwhile even for those who have little knowledge (or even interest!) in Bauhaus. Recommended.