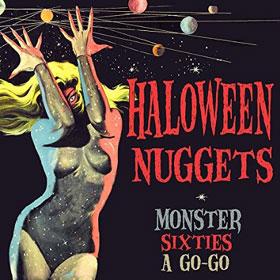 Halloween’s coming: October 31 is a mere two weeks away. Personally, it’s my favorite holiday: for several years I lived on one of my city’s busiest residential streets, the go-to location on Halloween. This upscale neighborhood (we were firmly at the bottom of of the street’s socioeconomic scale there, by the way) was very popular with trick-or-treaters. So much so, in fact, that people chartered vans and buses – I kid you not – just to drive their kids to our street where they could collect candy. One year, we had over 500 kids ring our doorbell.

Leaving other family members to dispense the loot, I stood out front in a creepy mask, hood and gloves, playing (well, playing after-a-fashion) my Theremin. The spooky tones fit perfectly for the play-fun that is modern Halloween. Music – especially music laden with eerie, gimmicky sounds – has long been a staple of this fall holiday.

Like Christmas, Halloween has engendered a fair amount of its own theme music. But not a lot of it has hit the charts in a big way, despite its quality. And so when an artist records a Halloween-themed tune, it usually slides quickly into obscurity. I mean, who wants to hear spooky music once November rolls around?

Well, if you’re thinking to yourself, “Me,” then I have a treat for you. Rock Beat Music has put together a box set – three discs packed to the limit – of 1960s music loosely built around the theme of ghosts, goblins, witches and monsters. Drawing mostly from among the era’s hopelessly obscure sides, Halloween Nuggets: Monster Sixties A Go-go is a fun if modest collection of ninety-plus tracks.

Because from a cultural point of view “the sixties” really began circa February 1964, there are a number of 50s-sounding tunes here. Most lay on the gimmicky theme a bit thick – loads of spooky sounds, scream and whatnot – but the underlying theme is an undeniably kitschy sort of fun. While there are a few duds – Ralph Nieson and the Chancellors‘ manic psychobilly raver “Scream” is repetitive enough to give even the most die-hard listeners a headache – there are plenty of gems here. The song titles (“Tombstone No. 9,” “Cha Cha with the Zombies”) and one-off band names alone (Frankie Stein and His Ghouls, The Graveyard Five) are entertaining enough, and a lot of songs are goofily wonderful.

Some of these tunes will be familiar to connoisseurs of garage rock obscurities: Positively 13 O’clock‘s reading of The Count Five‘s “Psychotic Reaction” has been comped many times, as has Kiriae Crucible‘s “Salem Witch Trial.” But for every one of those, there’s a too-rarely-heard track like Baron Daemon & the Vampires‘ “Ghost Guitars.”

The track sequence is peppered with laughably awful audio tracks from B-movie trailers. You don’t really need visuals to know what The Astro Zombies or Night of the Blood Beast are about; their inclusion here doesn’t impede the flow of the music. Instead, they just add to the fun.

James Austin – the label’s leading light when it comes to compilations: see also Los Nuggetz – has done his usual fine job of collecting and choosing the songs. What he hasn’t done – and where Halloween Nuggets leaves me a bit wanting – is to provide anything along the line of discographical information, or any sort of liner notes, for that matter. So listeners are left to wonder exactly what was behind an admittedly ace number such as Ervinna & the Stylers‘ “Witch Queen of New Orleans” or the good-timing garage jangle of The Circus‘ “Burn Witch Burn.” (The exceedingly tiny type used for track listing on the box’s back is frustrating to readers of a certain age, too).

But those are minor issues; we’re here primarily for the music. And Halloween Nuggets digs deeply into the graveyard of rock’n’roll (and pop) obscurities for this set. And this 3CD set might be just the ticket to enjoying a little bit of lightweight fun before the Christmas decorations come out. (How’s that for scary?)