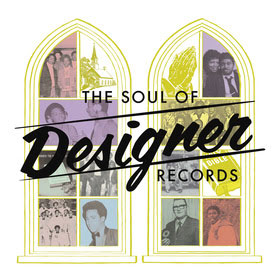 From a certain point of view, gospel music can be pigeonholed as a bunch of love songs all written to or about one person. But as with any music genre, there’s much more than one dimension to it, especially if one digs a bit deeper into the music. And that’s certainly the case with the (mostly) African-American gospel cut for Designer Records, a tiny “custom” label run by the colorful Style Wooten.

Designer was a precursor of what would later be called a “vanity” label: acts would come in, pay their fees, and cut a song or two. Rarely did anyone scheduling a session harbor the anticipation of scoring a hit single. Especially in the case of the gospel sides cut for Designer (many, many hundreds of other artists in other genres recorded tunes under Wooten’s supervision), it was often a case of traveling gospel groups coming to town for a church gig, passing the hat to collect “love offerings” and then dropping by the studio to cut a one-off, low budget track.

Of course all of this is wonderfully described in Michael Hurtt‘s liner notes that accompany the 4CD set The Soul of Designer Records. Packaged in a lavish and sturdy sleeve that mimics the gatefold LP jackets of old, this compilation showcases 101 recordings done for the label. And even for those not attuned to gospel, it’s a wonderful set of music. The musicianship – provided by local Memphis players including guitarist Roland Janes – is surprisingly first-rate: Designer and its myriad sub-labels might have been cut-rate, and Sonic Studios wasn’t exactly Stax or Ardent – but most everything about these tunes is first-rate.

As Roland Janes (quoted in one of Hurtt’s accompanying essays) said, “Style [Wooten]…didn’t know a thing about music.” But that didn’t stop him from making sure these recordings were as good as they could be. It certainly helped that the vocalists tended to be in super-tight, road-tested outfits who were able to give a high quality performance in a few takes. And while exactly zero of the tunes on this collection would go on to any measure of distribution (much less financial success), The Soul of Designer Records is a treasure trove of excellent music. Though the players on many tracks were drawn from the same relatively small pool of musicians, the instrumentation never once sounds phoned-in: there’s a surprising variety of styles on display, albeit within the confined framework of gospel. And the performances handily and vividly illustrate the musical cross-fertilization of soul, rock, blues, r&b, country, gospel and other forms.

The liner notes include brief biographies of some of the acts preserved on this set, but what is most remarkable is the lack of detail: the information simply doesn’t exist. Hurtt provides what information he can, but in many cases, a sentence or two (or nothing) is all that remains to document these groups’ sessions for Designer.

Except, of course, the music. Thanks to modern-day label Big Legal Mess and the archivists behind this ambitious project, hours of fine music is now saved from total obscurity. With luck, the release will be remunerative enough for the label that they’ll see fit to issue future volumes, chronicling Style Wooten’s recordings of rockabilly and other musical styles. The Soul of Designer Records is enthusiastically recommended; I won’t be a bit surprised to see it nominated next year for a Grammy Award or three.