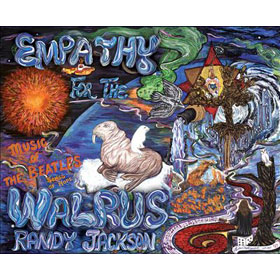 Randy Jackson – Empathy for the Walrus
As a rule, I’m rather wary of tribute albums. More often than not, they’re bereft of original ideas, and too reverent by half. And when they’re not, they seem likely to miss what was/is important about the subject of the tribute, and instead use the opportunity to press their own identity onto the songs of a (generally superior) composer.

Thing is, those truths (I call ’em like I hear ’em) mean that the exceptions end up being pretty special. And here, I am pleased to report, is one of those. Randy Jackson (not the jazz bassist/American Idol guy, and not Michael Jackson‘s little brother) was and remains leader of rock band Zebra (you may recall their 1983’s “Who’s Behind the Door,” an excellent AOR rock single of the era, no mean feat). And on his new solo album Empathy for the Walrus, Jackson takes a relatively unique approach and applies it to the peerless catalog of The Beatles.

Armed only with acoustic guitars (most of ’em sound like 12-strings) and his voice, he runs through some of the best Beatles tunes from the later half of their career arc. Jackson allows himself virtually unlimited overdubs on these arrangements, but all he adds are more guitars and more vocals. And more, and more.

The results are nothing short of stunning. His deeply textured, percussive style on the guitars and his strong voice both lend themselves to this multi-layered technique. Here, Jackson favors John Lennon‘s compositions ever so slightly over those of Paul McCartney, but they both get the Jackson treatment. (so does George Harrison, on “Something.”) Drawing from the best cuts you’d find on Beatles 1967-1970 (the “blue” album) and throwing in a few from outside that era – “Norwegian Wood” and, wait for it, “Free As a Bird” – Jackson highlights both the strength of the songs (melody and lyrics) and his own strengths as player, singer and interpreter. Even the songs that were originally light on guitar (the Abbey Road suite in particular) come off well in Randy Jackson’s capable hands. Highly recommended, even to those who might be put off by the overall concept. 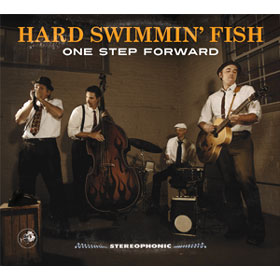 Hard Swimmin’ Fish – One Step Forward
When I hear or read the name Mitch Easter, thoughts of a certain kind of music fill my head. The Winston-Salem-based producer/musician was a key part of the success of R.E.M., The dB’s and his own band, Let’s Active. And that’s only naming three from a much longer list. And while all those bands had/have their own sonic personality, they do share a certain sensibility.

All of this makes Hard Swimmin’ Fish‘s One Step Forward a bit unexpected. This electric blues quartet from Frederick, Maryland plays a swinging style of blues that relies on the sonic textures found in hollowbody electric guitar, snare-centric drumming, solid doghouse bass playing, overdriven harp wailing and soulful vocals. And none of that has anything to do with producer Mitch Easter.

At least I didn’t think so until I heard One Step Forward. The brief band-penned liner notes explain that the band generally employs a DIY approach, but that this time ’round they wanted something different. I haven’t heard any of their earlier self-produced material, but one listen to the album makes it clear that Easter knew what to do: set up the mics, get the levels, and then get the hell out of the way. And if that’s not how it went down, it’s how it sounds. The production never calls attention to itself.

The band’s twelve tunes (mostly originals with a few standards mixed in) are successful at holding interest while remaining safely within the (occasionally restrictive) blues idiom. The album highlight is “Hear Your Mama Calling” with its extended blistering lead guitar solo, but all the tracks are good. They swing, they swagger, they deliver. 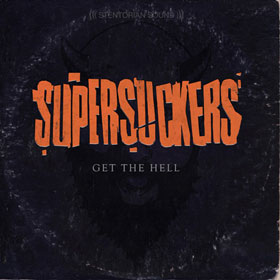 Supersuckers – Get the Hell
From the moment I heard the opening air-raid-siren that leads into the crashing title track, I knew I wanted to review Get the Hell. Imagine the best characteristics of 70s, 80s and even 90s heavy rock. Now subtract all the artifice and posing. Not left with much, you say? I beg to differ. The howling, growling delivery on this, the nineteenth(!) album from this quartet, proves once again that there’s plenty of life left in the hard rock idiom.

They call themselves the “Greatest Rock’n’Roll Band in the World,” and even if you might dispute that claim, there’s no denying that The Supersuckers play as if they’ve won the title and have to fight to keep it. Look elsewhere for subtlety; cast your ears in another direction for nuance. The thirteen tunes on Get the Hell rock, and they rock hard. Vocalist/bassist Eddie Spaghetti shouts his snarly, leering lyrics while the rest of the band pummels along in an unrelenting yet always tuneful manner.

The song titles tell the story: “Disaster Bastard,” “Bein’ Bad,” “Shut Your Face,” “Rock On.” If you fret that all today’s hard rock is retreads and posturing, get the hell over to a record store and get Get the Hell. It’ll cure what ails ya.