Moogfest 2014 was indeed quite a different creature than its immediate predecessors. In both its focus and attitude, the five-day music/arts/technology event in Asheville NC was closer to the spirit of the original Moogfest, a smallish event held in New York City. 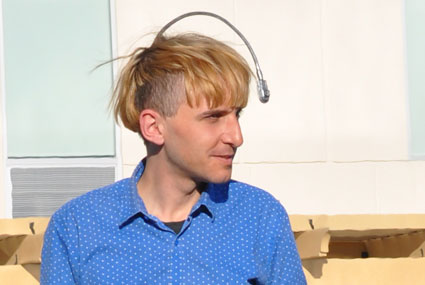 Of course the festival’s namesake, pioneering innovator Dr. Robert A. Moog – the man whose oft-mispronounced surname (properly spoken to rhyme with “vogue”) is now all but synonymous with the synthesizer – left this Earth several years ago. But as an attempt to carry on in a manner in which he might approve, Moogfest 2014 was wholly successful.

I read post-event news items stating that the 2014 event lost money. I also read that the organizers expected such an outcome, based on it essentially being their “first” festival. Earlier Moogfests in Asheville were run by AC Entertainment, the outfit that ably brings us Bonnaroo, Big Ears Festival and other mega-events. This Moogfest was more humble in its festival-type organization, but perhaps more ambitious in other ways. The lack of a major underwriter (on the scale of, say, Apple or Coca-Cola) was cited as part of the reason for the shortfall, but word on the street is that Moogfest 2014 was successful enough that some big names are interested in lending their support (read: dollars) to future Moogfests. 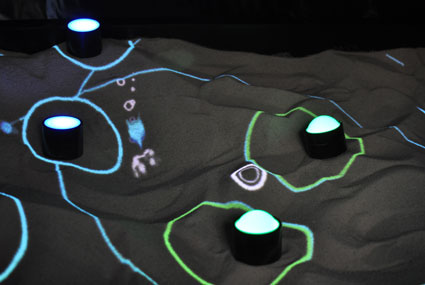 The character of Moogfest 2014 was, to a great degree, defined by the wide range of talks and presentations given. A long parade of synthesizer-related pioneers gave up-close-and-personal talks, most of them scheduled in the Masonic Temple on the north side of downtown (and a mere block from Moog Music’s facility) There, festivalgoers could see and hear Roger Linn (creator of the LinnDrum, one of the earliest synthesized percussion devices), Don Buchla (Moog’s “competitor” in synthesizer development back in the 60s), Don Oberheim (an important pioneer in the second wave of synth development, when polyphonic instruments came on the scene) and many, many others. These generally off-the-cuff, informal talks were almost invariably followed by Q&A sessions in which synth anoraks could ask the most niggling of questions of interest only to other synth geeks (present company most definitely included). 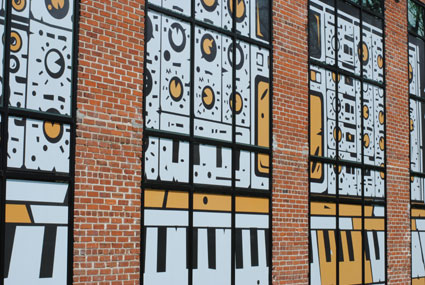 Still, there was certainly plenty of music as well at Moogfest 2014. And much of it was very, very good. And so while my own interest was placed most heavily on the daytime talks, I did take in as many music sets as my schedule and endurance would allow. 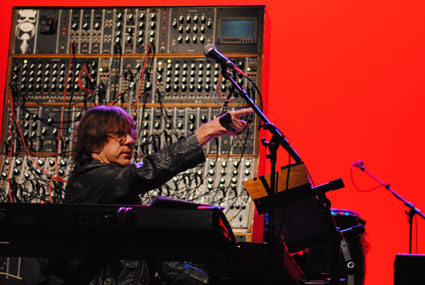 Keith Emerson‘s set at The Diana Wortham Theatre offered fans a chance to see something quite rare. Of course as part of Emerson, Lake and Palmer (and before that, The Nice), the keyboardist was most often found on the large concert stage, often inside of a sports arena. (Love ’em or hate ’em, ELP were big concert draw in their day.) But the nature of the intimate Asheville venue (capacity: 500) means that if you got in, you were treated to what felt like a private recital. 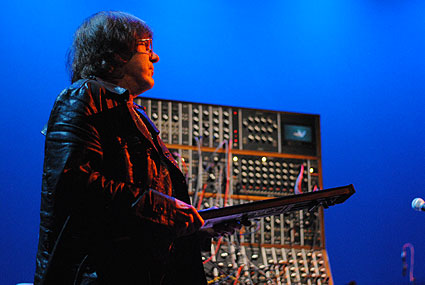 Which isn’t to say that it was low-key; it was nothing of the sort. Emerson, backed by the beastly Moog Modular, played mostly seated, but he was fully animated in his performance. He even whipped out the portable ribbon controller device. That piece of gear, infamous for its dodgy reliability record, failed to perform in the manner Emerson wanted, so – to peals of laughter from the audience – he mimed wiping his ass with the thing. 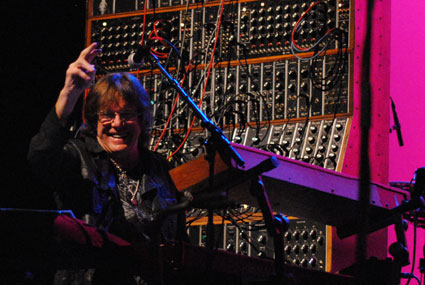 Emerson is not currently on tour (nor does he have one planned at the moment), so when asked by Moogfest organizers to perform a full set (he had originally thought he’d do one number in a private setting), he rounded up his band, including guitarist Marc Bonilla. The group ran through a varied selection drawing from both Emerson’s solo catalog and his hits with ELP. Many of the songs were re-cast in arrangements far afield from the ELP ones, sometimes employing instruments that were never part of the 70s band’s onstage arsenal (most notably Bonilla’s banjo). The well-received set was highlighted by Emerson’s fiddling with the modular, and while he didn’t bring out the trademark daggers or run around the stage like a wild man, he turned in an exciting one-off concert performance that was a thrill to behold.