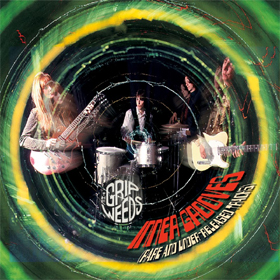 Longtime fans of The Who may agree that despite its piecemeal nature, Odds and Sods ranks among their best efforts. Freed from the constraints of a unifying thematic approach, that album instead collected a bunch of excellent songs that hadn’t gotten the attention they deserved upon original release.

And that’s the approach employed by The Grip Weeds on this new collection of eleven tracks. All the trademark Grip Weeds elements are in place throughout this record (subtitled “Rare and Under-released Tracks”). You’ll find soaring close vocal harmonies, shimmering, power-corded guitar riffage, and kinetic drum work. Right out of the gate, the band delivers “Rainy Day #1 and #2, as much a pop classic as they’ve ever done. And the full version of the exploratory “Sun Ra Ga” mentioned in this 2011 interview with the band’s Kurt Reil finally makes a CD appearance. The unplugged-style “Every Minute” proves yet again that The Grip Weeds are served equally well when dialing down the intensity as when rocking out. That’s also true on the alternate version of “Love’s Lost On You,” but Grip Weeds fans will need both versions (the other’s on 2001’s Summer of a Thousand Years).