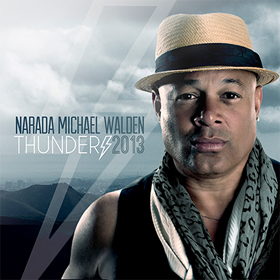 Polymath Narada Michael Walden is a giant in many fields: a monster drummer in the fusion, progressive, jazz and funk fields, he’s also a highly accomplished songwriter who’s penned hits for pop singers (Mariah Carey, Whitney Houston and others). But on this album, he’s out front. And he makes a compelling case that out front is indeed where he belongs.

After the sound effects opening track, Walden (on drums, keys and lead vocals) and band explode out of the speakers with “Throw Your Hands Up,” sounding for all the world like pirime-era Lenny Kravitz, with perhaps a little more Sly & the Family Stone thrown into the mix. The album title provides the thematic glue for the entire album: whether it’s a riffy number like “Shake the House” or “Shirley Mae,” most of these tunes are heavy. And when Walden lightens up, as on the ethereal “40 Days” with its dreamy synth pads and cooing vocals, there’s still plenty of power; it’s simply that the power is reined in, making it even more effective. Matthew Charles Heulitt‘s stellar guitar work throughout the album alternately recalls David Gilmour and/or Joe Satriani. Thunder is an accomplished, consistent album.