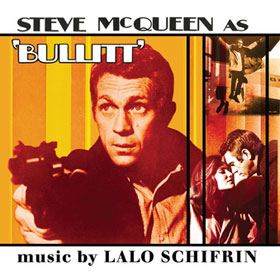 If, like me, you grew up in the late 60s and early 70s, this music will feel warmly familiar. This is true even if you’ve never heard it before, or if you have but didn’t know it. Schifrin was a veteran of the jazz scene by the time he got into scoring for TV and motion pictures, and his scores were usually a mix of swinging, soul jazz with punchy horns, the kind of stuff that set the tone for countless crime- and spy- thrillers of the 70s. He’s the staggeringly prolific guy who gave us the earworm “Theme from Mission: Impossible” and many others, and he’s earned critical (four Grammys) and commercial (loads of sales) success for his efforts.

The Bullitt score is very much in line with what you might expect. Those swinging horns and edge-of-mayhem percussion bits lay down the foundation. Depending on the demands of the scene, Schifrin’s score adds vibraphones, and other instruments into the mix. Stinging string sections abound, and – let’s thank Herbie Mann for paving the way – lots of jazzy flute leads. There’s not a load of guitar here, but when it does appear, it’s very much in a mellow, octave-style Wes Montgomery bag. A bit of gurgling soulful organ pops up now and then, and some bright drumming adds splashes of excitement where it’s needed. Hand percussion (shades of Mission: Impossible) is added here and there to good effect. Some avant-garde strumming of the inside of a piano recalls Emerson Lake and Palmer‘s “Take a Pebble,” but only a little. (And the Bullitt soundtrack predates ELP’s debut by a year, so there.

If you’re wondering, “Shifting Gears” (track #2) is the backdrop for the introduction to the famous San Francisco car chase scene, perhaps the most famous of its kind in all cinematic history. But what’s interesting – and more than a little gutsy – is that most of that scene features no music at all. No dialogue, either: just the roar of engines, the squeal of tires and related sounds.

Bullitt didn’t have a lot of romantic scenes, so you won’t find much in the way of mellow mood music here. No, it’s mostly tension building, tension released. Exactly what you’d want from a soundtrack of this ilk, Bullitt delivers on all fronts. A lot of fun, and more consistent in its own way than Isaac Hayes‘ landmark Shaft soundtrack from three years later.