A Conversation with The Tubes’ Founder Bill Spooner, Part Five

“We’re waiting for an investor.
Maybe it’s you.”

Bill Kopp: I remember something from a little later in The Tubes’ career, from The Completion Backwards Principle era tour. The way you opened the show was that you’d all come out dressed in business suits, with briefcases. But you weren’t in that; it was all the guys in the band plus, I guess, a roadie or something. The song was “Business.”

Bill Spooner: That was because I had just had knee surgery. I’m singing on the track, and I had done it onstage for a year before that. But then I screwed up my knee skiing and had surgery. Plus, I wasn’t really a dancer to begin with. But the knee injury was my excuse not to do it. Because it did hurt.

I’m actually singing two of the parts on the track [not on the album, but on a laserdisc that came out around the same time] because when we recorded it, Roger was out of town. So I figure that made up for it.

That was Chopper [onstage], our road manager.

BK: I saw the Tubes several times in those days. One time, at Atlanta’s Civic Center, I was in the front row with a 35mm camera that had a 200mm zoom lens. I was removed by security. 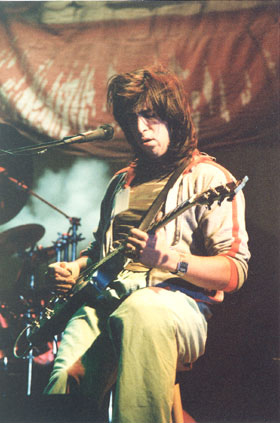 BK: Yeah, but they were actually very nice: “Go put your camera away, back in your car. Then you can come back in.” They didn’t take my film or anything. The pictures came out great. I have a poster print of one on my living room wall. You’re sitting on a bar stool playing guitar, and you have one of those calculator watches on your wrist.

BS: Calculator watch? That was to calculate time between pills, I imagine. I guess that was from when my knee was still screwed up.

BK: A left-field question, if you don’t mind. On the Outside Inside tour, when you guys did “Tip of My Tongue,” it seemed to me that the horn parts were being played by you on guitar, through some sort of effects. True?

BS: Right, but we were also playing along with a tape. We had a tape that ran, and it had a click-track on it. And I played along with the horn parts using a Mutron or something. Basically, an envelope follower. And I tried to make it sound like it was real. We just couldn’t find a way to duplicate it. Mike Cotten could have made the horn sounds, or he could make the other sounds that the song needed.

Plus, they were really complicated; the horns were done at The Compound, Earth, Wind & Fire‘s studio. That was the EW&F horns. Those guys are tight, I’ll tell ya. Very hard to duplicate. Somewhere I have a version of that song with Maurice White singing it.

One of the few benefits of working with David Foster was his relationship with Earth, Wind & Fire. He had a few other friends I liked, too. Like Bobby Kimball, Steve Lukather. 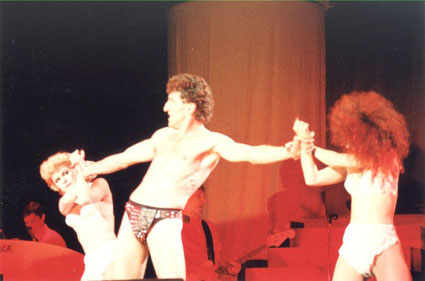 BK: One last question. For years now, I’ve been hearing about a Tubes documentary that Mike Cotten has been working on. Do you know anything about how that’s coming along?

BS: I think it’s finished. He’s been working on it for about ten years. The problem is that to put it out, we have to secure the rights to the songs. Even though we wrote the songs, the versions that people are familiar with are owned by A&M and Capitol, which is all Sony or EMI. And between the two of ’em, they want about $250,000 just for the rights to put those in a movie. It is a lot of songs, but you’d think they’d be a little more generous with their licensing. But they’re not.

So we pay that, or go in and re-record all those songs, which would probably cost just as much. And it would never sound the same anyway. So that’s the hold-up. Kenny Ortega [Tubes choreographer who went on to greater fame with the 1996 and 2002 Olympics – bk] has expressed interest, but he’s not going put in his own money. So we’re waiting for an investor. Maybe it’s you.

It’s a very interesting film. Besides all the live stuff, there’s interviews with everybody we’ve ever worked with, plus another fifty people we didn’t work with. It’ll be a pretty interesting movie if it ever gets released. I hope I’m still alive by the time it gets released.

The 2CD set pairing The Tubes’ Young and Rich with Now was released in 2012 on Real Gone Music. Copies are still available, and are well worth seeking out. — bk