Ian McLagan relates an amusing story, one that illustrates his old band’s far-reaching influence. “When working on The Small Faces DVD a few years ago, I was doing an interview with Rob Bowman, the guy who wrote the definitive book on Stax Records [Soulsville, U.S.A.: The Story of Stax Records]. We listened to a CD of previously-unreleased cuts by Booker T. & the MGs and The Mar-Keys. One of the tracks was called ‘Carnaby Street.’ I mentioned that track to him – how much I loved it – and he said, ‘No, you were first.’ ‘What?’ I said. ‘That lick,’ he told me, ‘was from “Tin Soldier.” So you did it first.’” McLagan pauses a moment to let it sink it. “Can you imagine? Your idols. It just blows my mind.”

A big fan of all things Memphis (“Stax is Mecca for me”), McLagan recalls visiting the Stax Museum a few years ago. “There’s big sign on the tape machine that reads, ‘Do Not Touch the Scully.’ I slapped my hand on that thing so fucking fast: ‘ I am touching the Scully. Fucking sue me!’” he chuckles.

McLagan tells me he has an album in the can, called United States. He expects it to come out in the spring. A live DVD has also been completed; its release will likely be sometime after United States is released. “And I’ve already got a bunch of songs ready for the following album,” McLagan says.

Meanwhile, there’s a treasure trove of previously unreleased, alternate, outtake type material on this new Here Come the Nice box set. Like fans, Both McLagan and Kenney Jones are hearing these cuts for the first time. “I was listening to the outtake of ‘Tin Soldier’ and remembered on hearing it that Steve [Marriott] had originally had a guitar intro that we dumped. But,” he laughs heartily, “we had worked so hard on it!” Jones adds that “listening to some of the studio banter is really a thrill. You feel like you’re back in the studio again. You can almost smell the hash and smoke!” He goes on to observe the “real” feel of the sessions, in vivid contrast with many modern recording which he finds too clinical, too rigid.

As far as the new compilation, McLagan is very pleased with the results. “Rob Caiger [box set producer] has done an amazing job; kudos to him for working so hard on it for such a long time. He’s a great ferret for having located all these master tapes from America and London, from fans, and so on.” McLagan relates the story – chronicled in Here Come the Nice‘s book – of how many studio master tapes had been abandoned in a skip [Americans call it a dumpster], to be retrieved and hidden away for many years by fans.

Ian McLagan provides further evidence of Caiger’s uncanny ability to find long-lost material: “He’s discovered film from the Marquee Club, live footage of Jimi Hendrix, The Small Faces, The Who and others. When the Marquee closed, someone just took all the stuff home with him. Nobody was interested in all these film cases. So he’s discovered loads of stuff! Hopefully, eventually there’ll be a Marquee DVD.” 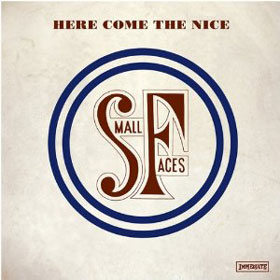 But what about further unreleased material from The Small Faces? “I don’t think there’s any…” McLagan interrupts himself. “Well, people always ask me about The Ronettes song; there’s one track that often comes up in interviews. But I don’t remember having ever heard, having ever recorded it. But apparently we cut ‘Be My Baby’ at some point. I don’t remember. But then I don’t remember cutting ‘Get Yourself Together,’ either! Paul Weller told me about that one,” he recalls. “No memory of it. And now I play it every show!” [That track was released as the French b-side to “Here Come the Nice,” and as an a-side in, of all places, Thailand. – bk] For his part, Jones hopes and believes that the multi-track masters for Ogden’s will someday turn up. And when that happens, he’d like to “remix the album with Glyn Johns.”

Jones says he has mixed emotions when listening to these long-lost tapes. “The great thing was really being able to go back in time. It’s like a window, an opportunity to step back into The Small Faces’ atmosphere. And he’s especially pleased with the remastering done on this new collection. “Existing technology has allowed us to add more bass [frequencies] and lead and top where it should be,” he says. “Over the years, with [other] people re-releasing it, they have not even cared what it sounded like. But now, it’s really brought out Ronnie Lane‘s bass playing. You can now hear what a great bass player he really was.” Kenney Jones believes that, with the release of Here Come the Nice, “wrongs have been put right.”

More information on Ian McLagan can be found at ianmclagan.com. Kenney Jones tweets at @KenneyJones. The official Small Faces website – with details on the new box set – is here. And that new 4CD box set – Here Comes the Nice – is available exclusively from Amazon.com