The 1960s were a staggeringly fertile period for pop music. And – thanks in no small part to the success of The Beatles – a disproportionate (though completely deserved) share of that music came out of the British Isles. Still, owing to any number of factors, several British artists of consistently high quality failed to expand their commercial success beyond their shores. In some cases, that failure was due to bad luck: The Kinks, for example, ran afoul of the Musicians’ Union in the USA and found themselves effectively banned from performing stateside for many years. The Move were perhaps just too topically British in their outlook, a tad ahead of their time in terms of their media-savvy approach.

And perhaps it was that strong whiff of British-ness, and a feeling that it somehow wouldn’t translate to American audiences, that kept The Small Faces off of the U.S. charts. Though they released five albums in the UK in the years 1966-69, only one of those – 1967’s Small Faces, a modified version of which was released in the USA as There Are But Four Small Faces – received anything like proper distribution. So it was that when guitarist/vocalist Steve Marriott left, and the band broke up in 1968 (with their last LP, 1969’s The Autumn Stone already in the can), the event went all but unnoticed by American audiences. 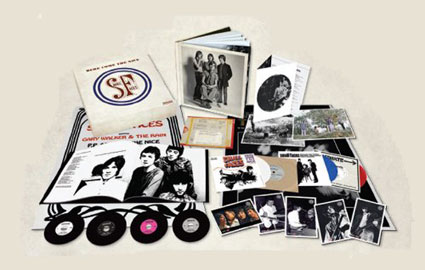 A later version of the group would, however, go on to great success in the States and elsewhere; The Faces rose from the ashes of the old group, with Ronnie Lane (bass), Kenney Jones (drums) and Ian McLagan (keyboards) adding former Jeff Beck Group vocalist Rod Stewart to the lineup. But over the years, the sides cut by the original Small Faces have assumed legendary status, exerting a great influence on many rock bands –most notably, but not exclusively, 90s Britpop acts – who’d follow in their wake.

Steve Marriott – who had gone onto success of his own with Humble Pie – died in a house fire in 1991, and Ronnie Lane – long suffering from Multiple Sclerosis – passed away in 1997. Surviving members McLagan and Jones continued (and continue) to be deeply involved in music; McLagan toured on and off with The Rolling Stones for many years, and these days lives in Austin TX and leads The Bump Band. Jones replaced Keith Moon in The Who for a couple of years, and these days is involved in a number of philanthropic endeavors as well as leading a band called The Jones Gang.

Jones and McLagan recently reunited offstage to help curate a new collection of Small Faces music called Here Come The Nice. This set – available only from Amazon.com – brings together 75 songs: every single the band ever released (both A- and B-sides) plus their EPs are collected on this 4CD set. The first disc collects all of those singles (a more modestly-priced single-CD set replicates Disc One of the box set; it’s housed in a nice hardcover mini-sleeve of its own). The second and third discs feature studio session tapes, and a fourth disc features live versions and outtakes. The package also includes a hardbound coffee table book, color-vinyl 7” EPs, a facsimile of a studio acetate, two posters, and much more, making it essential for the hardcore Small Faces fan. But the music’s appeal is much wider than that. 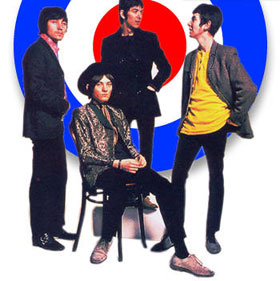 One of the most distinctive features of The Small Faces’ music was their very prominent use of keyboards within the pop format. True, plenty of other pop groups used electric piano and organ as a sort of filigree, and the more progressive groups would center music around keyboards, but The Small Faces were unique in their ability to use keyboard as a central element in tunes that rocked. “I must say that I always feel that I’m playing in guitar bands,” says Ian McLagan. “So I always think of the guitar as central; I try to find a part that’s different, that accents it without playing the same thing as the guitar. That’s really my job, and I think it’s the job of most keyboard players.” He adds, “The Bump Band’s my band, but I still treat it the same way.”

“When ‘Mac’ joined the band,” says Kenney Jones, “it was such a revolutionary change for us. It gave us a whole new dimension. I had never worked with a keyboard player before. And from my point of view, my drum playing accelerated more under the influence of what Ian was playing.”

Thinking back on The Small Faces tunes, McLagan notes, “Sometimes [at first] I wouldn’t really know what to play. I’d listen to a song, and sit at the piano and figure out what the chords were. Sometimes I’d turn to Ronnie – because he always had ideas – and I’d say, ‘I don’t know what to play on this!’ Especially on his songs. And he might say, ‘Well, there’s that space there [vocalizes a melody].’ I’d try that, and it would give me an ‘in’ to the song.” He adds, “The other guys would always have solid ideas, but they’d leave it up to me unless I asked. And Kenney would feel the same. We liked the same music, so if Steve played something, I’d often know what I’d play with it. It became second nature.”

In the very early days, McLagan often played a Hohner Pianet, an electric keyboard with a sound similar to a Wurlitzer. (It can be heard on The Beatles’ “The Night Before,” among many other popular songs.) “I wanted one because Rod Argent of The Zombies used one. And I still like Hohners; these days I use a Duo, just like Terry [Adams] in NRBQ.”

With a few exceptions, most of The Small Faces’ original material is credited to Steve Marriott and Ronnie Lane. But as is generally the case with such things, all four band members had a hand in the arrangements. McLagan agrees: “It should always say, ‘Arranged by The Small Faces.’ In fact,” he adds, “’Produced by The Small Faces’ too. Andrew [Loog Oldham] got Steve and Ronnie and said, ‘you’re the writers, so you’re the producers,’ but we were all there, all of the time. But it doesn’t really matter; it’s the music that matters.” He laughs and adds, “You don’t get paid for being a producer on a Small Faces record!”