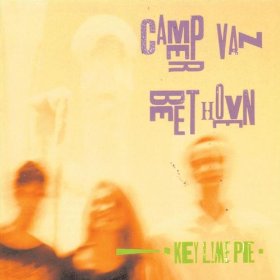 You know that marketing term “early adopter?” Those are the people who bought CD players in 1984. They bought Blu-Ray players before there were any Blu-Ray discs available. And they maybe, just maybe, bought a CD-i player and a DCC player back in the 80s.

Of course, by ’93, vinyl records (then and now my preferred musical media format) were scarce, especially when it came to new releases. So when I wanted new music, my choices were limited to cassettes. And I’ve always disliked storebought cassettes; those things seemed so cheaply made. Clearly the guts of a storebought cassette were not on a quality level equal to a Maxell chrome tape of the day. So occasionally I’d ask friends to make me mixtapes from their CDs. And thanks to a coworker – this was back in my corporate cube farm days – I got turned onto some new music beyond what I had heard on (reasonably good) commercial radio.

The band whose catalog lay at the center of my cassette discoveries was Camper Van Beethoven. I knew of them through their connection to Cracker (David Lowery‘s later/other band), but I hadn’t heard any of their music elsewhere. Certainly I hadn’t heard CVB on the radio.

By the time I was getting into their music, Camper Van Beethoven were no more (at least for awhile). And while I was fascinated by their early albums – I found them, especially on 1986’s II & III to be a sort of modern rethink on (American band) Kaleidoscope, David Lindley‘s late 60s band – their final pair of albums were, for me, the most accessible.

Those records – 1988’s Our Beloved Revolutionary Sweetheart, and Key Lime Pie from the following year – finally distilled their dizzying mix of influences into a distinctive sound, one that was more than the sum of those influences. While “One of these Days” is straightforward and commercial-sounding (it would be right at home on a Cracker album), even there the band introduce some off-kilter sonics into the mix. Often as not, where a more conventional band would drop in an electric guitar solo, Camper would instead feature a gypsy-flavored violin solo from Jonathan Segel (no Neil Diamond jokes, please; it’s been done). The band could stomp it out on an instrumental number like “Waka,” with plenty of distorted guitar, but there was still an odd sensibility, a sort of sideways take on world music, that made Camper songs sound like nobody else’s.

(In 2011, Camper Van Beethoven brought Key Lime Pie to the concert stage as a compete work; here’s a feature/interview with David Lowery concerning that.)

So now, some quarter-century after their original release, these album are getting the expanded-reissue treatment from Omnivore, one of the premier archival/reissue labels in operation today. Nicely housed in digipak sleeves with lovely booklets chock full of quality essays and photos, these reissues are exemplars of how a project such as this ought to be done. And not unlike Ryko’s reissue of Elvis Costello‘s albums many years ago (there have been countless other Costello reissue campaigns), the Omnivore sets effectively double the amount of music found on the originals. And aside from the occasional sonic differences you’ll find between, say, a bonus demo version or live take compared to the original studio cuts, the expanded albums are every bit as consistent as before.

One of the bonus cuts on Key Lime Pie even includes a sly nod to John Lennon in the form of a quote from “Oh Yoko” on “(I Don’t Wanna Go) to the Lincoln Shrine,” and there’s an even slyer nod to Ringo Starr on a Sweetheart bonus track: the band welds George Harrison‘s signature riff from Ringo’s “Photograph” onto Paul Simon‘s “Kodachrome.” (Get it?)

In fact, unless you’re a resolute vinyl fetishist, there’s little reason to own the original versions; the Omnivore sets are well worth trading up to. But wait: both of these albums are in fact available on vinyl as well as CD. Sweetheart features the original album’s contents on 180-gram vinyl, while Pie is a 2LP set containing the original album plus a single bonus track that – shades of Moby Grape – plays at the wrong speed and – like Howard Kaylan and Mark Volman‘s Checkpoint Charlie album – plays from the inner groove outward. Plus, while an original vinyl of Sweetheart is relatively easy to find, vinyl Key Lime Pie is somewhat rare and pricey. So really, there’s no excuse. If you dig the hooky, adventurous, difficult-to-classify sound of Camper Van Beethoven, the Omnivore reissues of Our Beloved Revolutionary Sweetheart and Key Lime Pie are essential purchases.