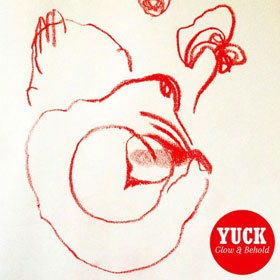 In October 2013, London/New York-based Yuck released Glow & Behold, their second album. And while a “cold” listen to it – as in, using ears that had never heard their self-titled 2011 debut – led to me naming it as one of the year’s best releases, some fans don’t agree. They remind me of the stories surrounding The Doors‘ signing with Elektra in 1966 amid frenzied cries of “sellout!” from their L.A.-scenester fan base. Like the man said, you can’t please all of the people all of the time.

The fact remains that with Glow & Behold, Yuck has in fact turned toward a slightly more tuneful brand of music than they served up on their first long player. But the elements that made them special remain, only now supplemented by sweet ear-candy melodies that remain in the listener’s head long after the insistent squalls of looped feedback on the title track fade away.

Though Daniel Blumberg – one of the band’s two guitarists and songwriters – left before the second album, Yuck’s more streamlined approach serves them well. “Because we changed our musical style [and went] into the studio to do things a little bit differently, it’s easy to think that when Daniel left, he took what was on the first album with him,” says Max Bloom, guitarist and (now) primary songwriter for the band. “And for a person like Daniel to have left the band, whatever we did after that point would have been under scrutiny. Anything that was different would have been [blamed on the fact that] he left.” So in that sense, anyone who wanted Yuck to effectively make the same album a second time was bound to be disappointed. 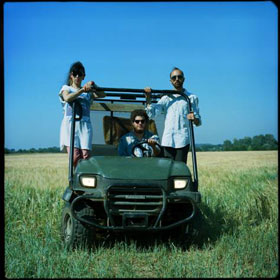 “At the end of the day,” Bloom continues, “the easiest thing to have done – which in fact is what we did do – was to ignore all the circumstances and make the album we wanted to make.” And while an allmusic.com review criticizes the band for having “focus[ed] on the pretty and melodic side of the equation,” I fail to understand how that’s a bad thing in and of itself. “The initial idea,” Bloom says, “was about the flow of the album, the way it starts, unfolds, and finishes. On the first album, we had a bunch of songs that were put on without a thought as to track listing.” On Glow & Behold, Bloom says he wrote songs to fit into the “jigsaw” of the overall album’s sequence. Asked if he consciously writes songs that are built on foundations that include a strong hook,” Bloom laughs and says, “That might be true.”

Often pegged as a shoegaze group, in truth Yuck’s sound – especially on the second album – bears the influence of song-centered artists such as Matthew Sweet, Teenage Fanclub and Aztec Camera. And even “Sunday” from the first album is redolent of The La’s and Belle and Sebastian. Bloom guardedly agrees, but adds Dinosaur Jr. and Sonic Youth, as well as “a lot of bands on Sub Pop and Merge” to the list of acts whose music has informed his songwriting, especially on the debut. “Loud, guitar-noise kinds of things.” As for Glow & Behold, Bloom says he listened to “Wilco and Jim O’Rourke” while writing songs.