Bill Kopp: We’ve talked in the past about the relatively few live dates that Brotherhood did. On those dates, which songs from the pair of albums did you perform live, and how did they differ from the studio versions?

Phil “Fang” Volk: We had to stick with songs that could rock, and were simple enough to pull off live, as well as show that we were really just a kick-ass rock band. Our first Brotherhood album had confused our “rock image” a bit, because it was very theatrical and thematic with lots of big productions and orchestrations. It was our Sgt. Pepper approach). The songs we pulled from the first album were: “Close the Door,” “Doin’ the Right Thing,” “Woman Unkind,” Ice Cream,” “Somebody,” and our single, “Jump Out the Window.” 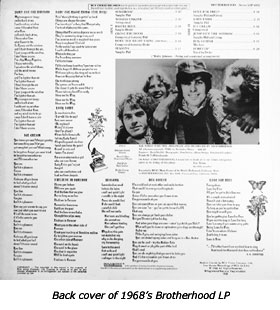 On the second Brotherhood album the obvious choices were: “Don’t Let Go,” “Family Tree,” “Deep Blue Sea,” “When the Chips Are Down,” “Back Home Again,” and of course, the covers: “California Dreamin’,” “Rose Garden,” and “When I Get Home.” Some of these songs didn’t work as well live, because the background vocals were weaker than the album sound, or the rock and roll energy was missing on some of the medium tempo songs like “Ice Cream” or “Doin’ The Right Thing.” It was hard to stretch out on most of these songs because the arrangements were fairly tight and set.

“California Dreamin’” gave us some opportunity to open up, as well as the bluesy stuff like “Deep Blue Sea,” “Don’t Let Go,” and “Family Tree.” We had to throw in some Paul Revere and the Raiders material, especially the songs I was known for: songs like “Baby, Please Don’t Go” and “Get It On.” We also threw in some other cover tunes like “Season of the Witch” and “Catch the Wind” by Donovan, and “Out of Sight” by James Brown. We always managed to dip into our roots with some songs by Ray Charles (“What’d I Say”), Fats Domino (“Hello Josephine”) and Little Richard (“Long Tall Sally”).

Bill Kopp: The booklet that accompanies Brotherhood: The Complete Recordings features photos that show organist Lee Michaels onstage with the band. How many gigs did you do with him, and how did his presence change the sound of the group?

His only studio presence was on the second Brotherhood album, where he played the organ on “Rose Garden.” He used to hang out at our sessions on a regular basis, and he would often jam with us in the studio between recordings, or when the engineers were on lunch breaks, or when there was down time.

Other friends would join in, like David Crosby, as well as members of Jefferson Airplane, who were recording in the studio next to us. Lee would often show us some of the stuff he was writing, which led to Drake and I producing a couple of his songs.

As far as gigs go, he performed with us a couple of times when the gigs were local, in the Los Angeles area – a couple of college gigs is what I recall. I wish he would’ve joined Brotherhood, but he wanted a solo career, and he eventually found his niche, and made some hits. Drake played extensively on a couple of his albums. Lee and his wife, and Tina and I would often play tennis together.

A few years after all this happened, and Brotherhood had broken up, and we all started losing touch with some of our music friends, something kind of bizarre happened. I got a call from Lee’s drummer, Frosty, who had played that iconic concert with Lee at the Hollywood Bowl when they were at their zenith. Frosty wanted to come over to my house and demonstrate the Kirby Vacuum System. No lie…this was for real. I asked him, “Frosty, are you still playing drums?” He said, “No, I’m selling vacuums!” He wasn’t kidding. So we made an appointment, because I sort of felt sorry for him, and I couldn’t understand why this stellar drummer was selling vacuums. He said he was making more money selling vacuums, and that he was excited to demo the product for me. This all felt a little surreal to me, but nonetheless, he showed up at my house wearing a suit and tie, looking very business-like, and he proceeded to give me one of the best vacuum demonstrations I’d ever seen, bar none. He was as good at vacuum demos as he was at drumming. He blew me away! It was like a one-man show! He was so entertaining, I couldn’t believe it.

Unfortunately, I didn’t buy the vacuum, because I didn’t have enough bread. I was an out-of-work musician! What irony!