It takes awhile to earn status as a Grand Old Man of, well, of anything. It seems to take even longer if the thing in question is rock music. But Nik Turner has earned the crown. As an early member of innovative British-based band Hawkwind, he added a jazzy dimension to their hard rocking, Pink Floyd-meets-Steppenwolf sound. Mostly self-taught (he did have a bit of formal training in his early 20s), Turner plays saxophone and flute in a style that focuses more on texture and feel than any sort of “schooled” approach. 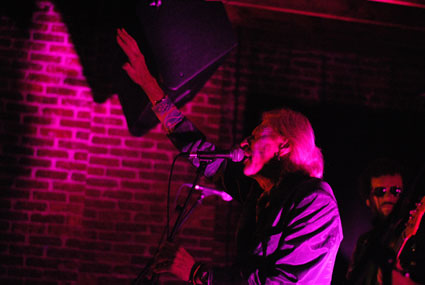 Though his tenure with Hawkwind (his second, actually) ended in the mid 1980s, he has gone on to do a great deal of work in a similar space-rock vein. There are nearly two dozen Hawkwind albums (new and archival material) featuring Turner, and he has nearly as many solo/collaborative album releases. Moreover, his guest appearances on the albums of other like-minded acts are too numerous to mention. In short, this 73-year-old from Oxford remains quite busy.

Turner’s latest studio release is 2013’s Space Gypsy. And while the album’s foundational concept is largely the work of guitarist Nicky Garratt (formerly of UK Subs) and producer/keyboardist Jürgen Engler, Space Gypsy keeps its marquee artist’s personality and musicianship right out front where it belongs.

I saw Nik Turner live onstage in November 2013 at Asheville NC’s Mothlight, a club that had just opened on the west side of town. For the American tour in support of Space Ritual, Turner was backed by krautrock band Hedersleben; they also did a wonderfully atmospheric opening set, followed by a dreadful and loud regional metal act, before Turner’s headlining set. In addition to Garratt’s deft yet distinctively punky guitar work, the band featured manic drummer Jason Willer, bassist Bryce Shelton, and Kephera Moon on keyboards (and dancing…lots of dancing). Before the evening’s music began, I enjoyed some time with Turner in the green room; in a relatively brief period, we covered a lot of territory. A simple question set Turner on his way; all I had to do, really, was sit there with him and happily take it in. He held forth on a potted history of his old band Hawkwind; multimedia and naked women onstage; his myriad musical projects; his mystical adventures in Egypt; and his healing powers. 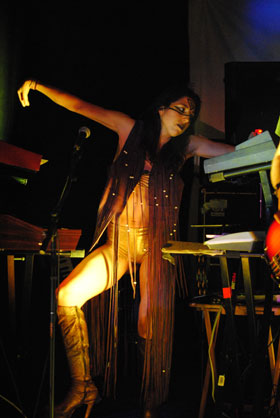 Bill Kopp: I hear strong echoes of your music, your style – both now and back in the Hawkwind days — in the work of both Julian Cope and The Psychedelic Furs, both respected and influential-themselves artists who came up in the late 70s and early 80s. What do you think it is about your music that appealed, resonated with them?

Nik Turner: Well, I think what we were doing was very original. The music was very diverse because there were a lot of diverse influences in the band. I was into jazz. I liked Jimi Hendrix, but I liked Miles Davis, too. And I met musicians in Berlin who believed that you didn’t need to be technical to express yourself, so I saw the idea of free jazz in a rock band!

BK: It was sort of a punk aesthetic, a decade and a half ahead of its time…

NT: That was my sort of point of view. Dave [Brock, guitar] and Mick Slattery [guitar] were into blues, really. Terry Ollis was a primitive drummer who taught himself to play. His parents ran a scrap metal yard. And John Harrison, the bass player, had actually been playing in big bands; he played in a band with Joe Loss. And Dik Mik [Michael Davies] was a guy I met who had never been in a band, and he didn’t play anything. But he was given this audio generator that produced all these different waveforms — sine wave, square wave, sawtooth wave – and an echo unit. And [laughs] to me, that became the sound of the band. That is what the band was about; it gave us that sort of “space” ethic.

It was later that Robert Calvert became involved with the band. He was an old friend of mine, and I spent a lot of time with him. He turned me onto a lot of science fiction and other stuff; Samuel Beckett and people like that, too. So I invited him to join the band at one point, and he did. This was after he had been involved in the production of the X In Search of Space (1971) album cover and artwork. He and Barney Bubbles put together the log book of the space ship. It was about a spaceship that had come to Earth and become two-dimensional. The record was the story, and the adventures were all recorded in the space log.

So once Robert joined, he said he had a work in progress, this rock opera called Space Ritual. So we put that together [as an album]. But the band itself – because we had so many diverse influences – weren’t just trying to play rock. I feel that we were breaking new ground. There wasn’t a genre that we were trying to fit into. We were just trying to produce music that came naturally to everybody. And everybody was being creative in his own way. I think that’s what created the individuality of the band. 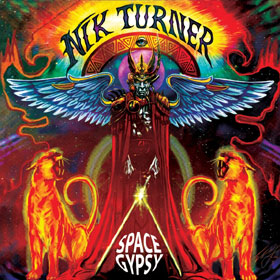 We had influences such as Michael Moorcock, the science fiction writer. He became involved with the band as well. He had been doing a number of community projects around Notting Hill; he got the band playing a concert underneath a flyover, on Portobello Road. He organized that because he had a stall in the market at that time. He sold bits of clothing; I remember, I bought a hat from him that looked like a pirate’s hat. So he got involved as well.

Part of Robert Calvert’s role was his poetry, and he also used some of Michael Moorcock’s poetry, including “In Case of Sonic Attack, Follow These Rules.” Robert did that stuff as well as singing his own songs from Space Ritual. And one of the songs he had written was “Silver Machine,” which was originally supposed to have been for Space Ritual.

But it wasn’t used for that; I don’t know why, actually. We recorded “Silver Machine” at a live gig, the Greasy Truckers party, with Robert singing. I think we used that recording on the Glastonbury album. But when we decided to record and release it as a single, we decided to have Lemmy sing it. That gave it a different sort of emphasis.