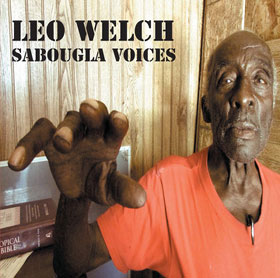 Every so often I’ll stumble across a story that is so note-perfect, so finely wrought, that my cynical side, the suspicious dimension of my nature is engaged. And since the arts are often home to some serious myth-making, when such stores concern musicians, I am doubly skeptical. But on the rarest of occasions, stories such as these are in fact true. The real deals do still exist: people with stories worthy of a Hollywood treatment are out there, waiting to be discovered.

So it is with Leo “Bud” Welch, and 81-year old gospel blues singer/guitarist from Bruce MS, an unincorporated town in Calhoun County. That county’s population has remained essentially the same size since 1890, though it did enjoy a brief boom in the 1940s. The nearest Interstate highway (I-55) is nearly 20 miles West, and the nearest city of significant size – Elvis‘ hometown of Tupelo – lies about 30 miles Northeast of the county.

Point is, Welch is from a region that’s near about as remote and rural as one can get in 21st century America. And here I’ll take a moment to quote verbatim from the press kit accompanies my copy of his new album, Sabougla Voices (more on which, presently)…

The phone rings at the Oxford, Miss.-based label Big Legal Mess. An intern tells the caller, “Oh, we don’t really do blues here anymore.” One of the company’s principals overhears this and grabs the phone. On the other end of the line is [Welch]. He’d heard about the label that brought you Junior Kimbrough’s First Recordings, Jack Oblivian, Reverend John Wilkins, Water Lairs and Bishop Manning and the Manning Family, and he wanted to know if there’d be interest in recording his debut album of downhome gospel and blues.

See? It really does read like the opening scene of a movie, right before we go to flashback.

And that flashback would run through Welch’s life, quickly hitting the high and relevant points in montage fashion: born in 1932; a young Leo learning guitar; a missed opportunity to audition for B.B. King; forming a gospel group called Leo Welch & the Rising Souls. And throughout the montage, viewers would hear the strains of Welch’s music.

The thing about his music is that it truly straddles the line between gospel and blues. On first listen, in fact, I heard it strictly as a blues collection: electric guitar and deeply soulful voice, backed by a no-nonsense lineup with little filigree (and fewer guitar solos). But as I listened more closely – the album richly rewards repeat listening – the gospel flavorings revealed themselves to the point at which they were so obvious, I wondered how I could have initially missed them.

First there’s the vocal choruses that back Welch up on many of the tunes. Not to traffic unnecessarily in cliché, but it requires no effort to imagine chorus-robed singers swaying and clapping in the background behind Welch and his sidemen. And then there’s the unmistakable lyrical focus of the songs. The titles tell the story: “Praise His Name,” “Take Care of Me Lord,” “Somebody Touched Me,” “His Holy Name.” You get the idea. But back to that bluesy first impression for a moment: the songs and arrangements are so strong, so heartfelt, that Sabougla Voices doesn’t require the listener to adhere to Welch’s set of religious views. It’s simply good music.