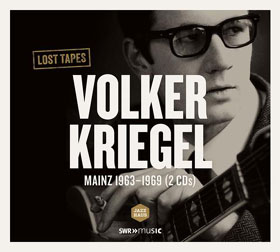 Consider yourself forgiven if you find yourself unfamiliar with the name Volker Kriegel, and even more forgiven if you’re unfamiliar with his work as pioneering artist in the soul-jazz genre. I mean, who would expect a mild-mannered German guitarist born in 1943 – the same year as George Harrison, for goodness’ sake – to make serious inroads in a musical style more closely associated with Americans, specifically African Americans.

In fact Kriegel’s earliest material finds him working in more of an electrified Django Reinhardt style. Only around 1967 did he begin to develop a sound more in a soul jazz vein. But when he did, the results were thrilling. The latest Jazzhaus release – another in its “Lost Tapes” series – collects 29 studio recordings Kriegel made in the early part of his career. Mainz 1963-1969 is a 2CD set of pristine studio tracks featuring smallish jazz ensembles with Kriegel leading the way on amplified hollow body electric guitar.

Many of the tracks feature Kriegel accompanied by one of a few upright bassists and a drummer; and while those are interesting and a delight to hear, they’re not revelatory in the manner of the other cuts. Those other ones feature vibraphonsits (either Claudio Szenkar or Fritz Hartschuh) and show a dazzling interplay between Kriegel’s nimble guitar work and the vibes.

On the vibes-less tracks – mostly recorded in a November 1963 session – Kriegel’s clearly enunciated single note guitar lines lead the trio through appealing jazz arrangements; the rhythm section is able enough, but is rarely called upon to do much beyond supporting the guitarist. This they do well, but listeners will have no trouble deciding who the star is here. Kriegel’s guitar mimics the sound and feel of a jazz vocalist. His lightning runs (and dissonant fills) on Thelonius Monk‘s “Rhythm-a-Ning” are the undisputed highlights of the 1963 set of recordings. The spare accompaniment on a reading of “Autumn Leaves” is lovely, and the track subtly points the way toward the future.

Because once Kriegel began working with vibraphonists on his Mainz recordings – mostly in three sessions from 1967, 1968 and 1969 – the band became a more democratic institution. His own playing is even more fascinating, and now that he’s joined by soloists of comparable skill and invention, his own playing improves. The interplay between guitar and vibraphone is a study in economy and taste. From the first cut of this era – a 1967 reading of “Tea and Rum” it’s clear that Kriegel has arrived; he’s barely recognizable form his sound of just a few years earlier. Even the rhythm section charges harder. And so it’s here that the soul jazz leanings come to the fore: on cuts like “Soul Eggs” – a tune he’d cut for official release with The Dave Pike Set in 1970 – there’s a thrilling, soulful feel to the entire affair. Even the more contemplative numbers — like “Morandi” — feature more in the way of texture.

The less well-known cuts that make up Kriegel’s ’67-’69 sessions on this disc are nearly as exciting. Surely the highlight – perhaps second only to “Soul Eggs” – is Kriegel’s unexpected cover of “Mother People,” a manic Frank Zappa track that originally appeared on The Mothers‘ We’re Only in it for the Money album (and a tune which Zappa memorably “performed” on a TV episode of The Monkees).

Jazzhaus archive curator Ulli Pfau recounts in the accompanying booklet how he stumbled across the tapes that make up this set. Readers are left wondering what other treasures may yet lie undiscovered in that archive. And Pfau’s editorial note tantalizes further: “This double CD contains only a selection of the recordings. Others are available for download online.” Anyone who enjoys the CD tracks will doubtless want to pursue the other cuts.