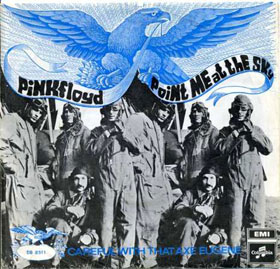 Released 45 years ago yesterday (and recorded in a single day a mere six weeks earlier), Pink Floyd‘s “Point Me at the Sky” is characterized (by Wikipedia) as “the least readily available of all officially released Pink Floyd recordings. Though it was an a-side, its flip – “Careful With That Axe, Eugene” is infinitely more well-known.

Featuring a gentle-then-shouted lead vocal from guitarist David Gilmour, “Point Me at the Sky” is very much transitional Floyd. Sonically it is very much of the heavy psychedelic style popular in ’68, and though its lyrics deal with space travel, it doesn’t sound much at all like what would later be known as “Space Rock” (Pink Floyd’s The Dark Side of the Moon being the exemplar of that genre).

Gilmour was still rather new to the band at this point; he had joined the previous December, ostensibly as a fifth member alongside then-leader Syd Barrett. Though the group did a small handful of live dates as a five-piece, by March 1968 Barrett was soon gone, and the group dynamic shifted greatly. The group’s second LP (and first without Syd), A Saucerful of Secrets was released in June ’68. But it’s long suite-like pieces – a rough template for the style the group would later pursue – were certainly not radio fodder. In those days – in the UK, at least – singles were often wholly separate from albums, and aimed at a different audience. “Point Me at the Sky,” then, could in some ways be considered a commercial effort for the fledgling Barrett-less Floyd. That said, it completely failed to chart. It would be the last non-LP single Pink Floyd ever released.

Though the song was composed with bassist Roger Waters, it’s Gilmour’s decidedly more tuneful vocal that fronts the track. Starting off gentle, elegiac, almost like a nursery rhyme, it initially charts a musical path not unlike the more childlike-wonder style Barrett used on Piper at the Gates of Dawn. But suddenly it blasts into a heavy, stomping section – unlike anything the Floyd had committed to tape previously, save perhaps the riffier sections of “Interstellar Overdrive” – before a massed chorus of voices proclaims the title lyrics.

The song has never appeared officially on a vinyl LP, and to date its only CD presence is as part of the bonus CD titled The Early Singles, included as part of the now-deleted 1992 Shine On box set. My own first exposure to this obscurity was via its inclusion on a bootleg/pirate LP I acquired many decades ago, the punningly-titled compilation Dark Side of the Moo.

But through the miracle of YouTube, I present to you Pink Floyd’s promo clip for  “Point Me at the Sky” in all its glory. (Better audio copies exist, but this clip has the advantage of showing our boys mugging for video.)

You may also enjoy the career-spanning Pink Floyd essay I wrote many years ago for Trouser Press.