Book Review: Before Elvis: The Prehistory of Rock ‘n’ Roll 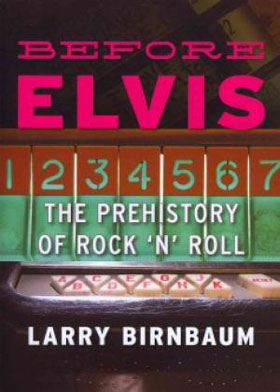 Imagine that you’ve just sauntered into a dimly-lit if friendly- vibed barroom. You’ve positioned yourself at a barstool and settled in to enjoy a leisurely drink to cap off a long day. A guy next to you offers a cordial hello, and you respond in kind. You like your space, but you’re not averse to a bit of idle chit-chat, and so the two of you engage in some good-natured discussion.

As is your wont (see, you’re more like me than you in this scenario, so stay with me), the subject soon turns to music. Specifically, music history. More specifically, the whole where-did-stuff-originate debate. Your uh-oh meter budges just a bit from its zero position, and you silently hope this doesn’t turn into some huge discussion. You just came in for a quiet drink, after all, right?

You know a good bit about pop music history, but you’re no walking encyclopedia. Nor, as it happens, do you care to be one. But this guy, he knows it all. And while on some level – several levels, really – you admire the heck out of the sort of person (the British call these characters “anoraks”) who can quote matrix numbers for obscure 45rpm singles, you have your limits of tolerance. He can make his point and back it up with facts, but then he should, well, y’know, shut up. Or at least let you have a moment to digest all the data he’s dumped on you.

The thing is, you find yourself agreeing with him on all points. How could it be otherwise? He truly does know his stuff. But there’s something fatiguing, almost tiresome about the manner in which he piles it on. Piles. It. On. So at the conclusion of your discussion – it does end, eventually – you come away a bit unsure about what to make of the whole thing. This guy is a true scholar, and you have absolutely no reason to dispute even the tiniest of his points. And even though you were essentially on the same side in this non-argument, you found the whole episode exhausting.

The promotional one-sheet accompanying Larry Birnbaum‘s Before Elvis: The Prehistory of Rock ‘n’ Roll characterizes the book as “[a]n essential work for rock fans and scholars.” I have no disagreement as to its suitability for the latter, but do wonder about its appeal to the former. The depth and breadth of Birnbaum’s research and knowledge is stunning – and that’s putting it mildly. Pick any song you like from rock’n’roll’s earliest days; pick a song that you consider a sort of template for much of what came after. Birnbaum’s here to tell you ( and show you, and show you, and show you) that, as the old book says, there’s nothing new under the sun. His scholarship gets into “coon songs” (yes, they were/are called that) and minstrelsy, and he traces that song – you know, the one you’re sure was written in 1952 – back to 1823. Or something. And backward beyond ’23, it gets a little murky. Okay, I’m exaggerating for effect, but only ever-so-slightly.

It’s all nearly too much to take. The amount of information he serves up is so massive, the delivery so relentless, that you may find yourself as I did, having to put the book down and let out a big, theatrical sigh after a few pages. I’ve had Before Elvis on my nightstand for more than four months now, and while I admire it to a great degree, I simply can’t easily bring myself to get through it. Were it laid out in a more encyclopedic fashion – rather than a seemingly unceasing narrative stuffed to the max with information – it might be a five-star reference book, essential for anyone who ever seeks to divine the source(s) of rock’n’roll’s obscure, oft-undocumented past.

I mean for all this to be a positive recommendation, but one of the most targeted and qualified kind. You have been warned.