Richard Barone on The Bongos’ Phantom Train (Part One)

Measured by album releases, The Bongos‘ musical career lasted a mere six years. The Hoboken NJ-based group released EPs in 1980 and 1982, and three albums between 1982 and 1985. And as far as nearly everyone knew, the group left RCA and split shortly thereafter, with each of its members (most notably singer/guitarist Richard Barone) going on to other musical pursuits.

But as is so often the story, that capsule chronology leaves out the nuances and details. What it also leaves out is the band’s fourth (“lost”) album, Phantom Train. Recorded shortly after Beat Hotel (their final RCA release), Phantom Train represented a sort of last-ditch attempt to finally make an album their way. But on the occasion of the belated release of this lost album, let’s let Barone tell the story. 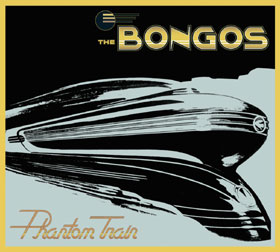 “The Bongos were on – let’s call it – a train,” he says. “From the minute we started. We started in 1980, getting signed by a British label called Fetish, and then putting out singles one after another. Then, going to England and recording an album there, Drums Along the Hudson. So we got on a nonstop track in 1980 that went on for a solid five years, when we never really stopped. We toured and recorded constantly.

“Phantom Train, we started recording literally one day after we had come home from a 300-show tour. We were working nonstop, and that’s kind of the train symbolism in my mind. And we were on RCA at that point. But, we had friends at many labels. The Bongos are friendly guys, and we had associates at many different labels. We had producers, engineers, quite a team of people we were working with at that point. So it was at that point that we were invited by [Island Records’] Chris Blackwell to try out some things at his studio in The Bahamas, Compass Point.

“But we never really signed to Island Records. We were just making music; we weren’t contracted to make an album for anybody. So we started recording, and I loved everything we were doing. And frankly we were fried from the tour as well. But personally I think it was one of the most creatively fertile times ever.

“To me, if you look at the Bongos’ career in the 80s, it was book-ended by Drums Along the Hudson and Phantom Train, which were done in similar ways. Both were just done for the spirit of the music. Neither of those were done with any kind of label pressure. Instead it was simply, ‘How can we make this sound awesome?’

“And we would try every technique, use the studio in every possible way. Especially on Phantom Train, you really hear the sound of the band. We had done some stuff with overdubs at RCA – which I loved – but there we wanted to show off the real sound of the band in a room. That’s the core of the album; there’s not as many overdubs. On some of the songs, like ‘River to River,’ literally everybody’s playing at the same time, even the vocals. We had been on the road anyway, so [we thought,] why not do what we do onstage, in the studio. And have it sound great.

“I had written most of the songs on the road, I think. I had a little writing room at the back of the bus, and I had a four-track tape machine to record the demos on. The band would get the four-track demo, and that would be the blueprint for the song. So the songs came from the road; that’s why there’s that train imagery on the album. It comes from being on an ongoing vehicle.

“The truth is that we had started recording in Greenwich Village at RPM Studios. I loved it; it was right down the block from where I lived. So we started there, but the weather started getting cold, and around November our producer/engineer E.T. Thorngren suggested we go to Compass Point. Because at the time he was working with Chris Blackwell, and so it seemed like a natural place to go.

“And we did. We stayed a few months there, experimenting with the sounds. A song like ‘Tangled in Your Web’ on this album is a complex mix that took a week to put together. As simple as the song is, we wold really work on the mixes. It’s state of the art, pushing to the maximum of the technology, and yet it’s not overly ‘produced.’ There really was a fine line we were walking.”