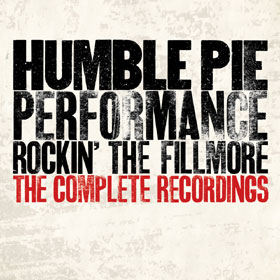 Ruminating on chronicles of excess, I recall that it was just about two years ago that Rhino Handmade released The Grateful Dead‘s Europe ’72: The Complete Recordings. Some 22 complete shows on 73(!) discs, you’d think it’d be more Dead than anyone could ever want. Of course if you thought that, you’d be – like me – a decidedly non-Deadhead sort of person.

But there was a clear market for it, and to be fair, on that 1972 tour, the Dead hadn’t gone as off-the-rails as they’d later do: the songs are long, but they’re still songs. And the early 1970s were indeed the era where “rock excess” was a redundant phrase. Long solos, lots of solos (even on dreaded bass guitar and drums!) were the order of the day. Tunes that extended well past the 20-minute mark weren’t all that unusual, though the vinyl format generally precluded that sort of thing from being enshrined on albums. (Well, Allman Brothers and Mountain excepted).

Thing is, sometimes the material, the performance, the bands…they actually warranted, justified that sort of excess. Recall that this era is the time period during which Led Zeppelin extended “Moby Dick” to, er, leviathan lengths.

And live albums were the coin of the realm. Even before Frampton Comes Alive (more on that guitarist presently), the live album that heralded the beginning of the end of live album era, concert albums ranked among the best-loved releases of the day. Deep Purple’s Made in Japan, anyone? And howsabout Roadwork from Edgar Winter’s White Trash? Yessongs, Roxy and Elsewhere, The Concert for Bangla Desh…all are commonly found in any good rock album collection.

And in those collections – as in mine, to name one – you’ll quite often find Rockin’ the Fillmore, a live document compiled from a two-day, four-show run Humble Pie did at Bill Graham‘s celebrated NYC club in late May of 1971. Originally a double LP, Rockin’ the Fillmore captured an unvarnished, balls-out rock show by the British foursome, at the peak of their powers. That album featured seven cuts, two of which (“I Walk on Gilded Splinters” and a cover of Muddy Waters‘ “Rollin’ Stone”) each filled an album side.

All four Fillmore shows were recorded (by the Fedco remote recording facility, with Eddie Kramer working the console), and Rockin’ the Fillmore was compiled mostly from tapes of the two evening shows. But that left bits and pieces from those two shows – plus nearly all tape of the two matinees – unreleased. Until now, that is. With the blessing and cooperation of Humble Pie surviving members Frampton and Jerry Shirley, the archivists at Omnivore Recordings have released Rockin’ the Fillmore: The Complete Recordings. Spread across four CDs – one for each concert – Humble Pie’s entire Fillmore run is presented in all its glory.

Now, when the juggernaut LP Frampton Comes Alive stormed its way up the charts in 1976, there was muttering – and said muttering even found its way to the ears of this then-twelve-year-old – that the tracks were, shall we say, sweetened. It was all the rage in the mid 70s to fix mistakes, re-record parts that (so it was said) somehow “weren’t properly recorded” (yeah, right) and so on. Kiss Alive was another record on which post-production was taken to laughable extremes. But Rockin’ the Fillmore was different. Unsweetened, undiluted, it was and is exactly what you would have heard had you been one of the lucky people who saw those shows.

Of course; live sound systems being what they were in those days, what you’ll hear on Rockin’ the Fillmore: The Complete Recordings is actually a helluva lot better. As drummer Jerry Shirley said upon hearing the loudest and quietest parts on the masters, “You could hear a pin drop…you could almost feel the room shaking.”

Sure, it’s excessive. At an average duration of 27:00, four live versions of “I Walk on Gilded Splinters” means nearly two hours of it. But each version has its own organic uniqueness, and each is worth hearing. Marriott and Frampton engage in some lovely dual lead guitar work, while Shirley and bassist Greg Ridley hold down a rock solid (if intentionally plodding) bottom end. While the set list for these four shows was substantially consistent throughout, the band did change it up just a bit: “Stone Cold Fever” (on the original album) was performed only once, and “Rollin’ Stone” was only done at the evening shows.

Speaking of excess, the band members start soloing nearly right out of the gate. On all versions of “I’m Ready,” Steve Marriott engages in a good bit of vocal cord-shredding dialogue with Frampton’s guitar, in that 1970s way. But it’s exciting stuff, visceral and real. And while Frampton’s vocals on Ray Charles‘  “Hallelujah (I Love Her So)” come off a bit weedy in comparison to Marriott (they share lead vocal duties on the number, featured in all four shows), the relatively brief tune may well be the band’s finest moment: here Humble Pie manages somehow to be swinging and pile-driving at the same time.

The Omnivore box set features the four discs in mini LP-style sleeves, with cover art similar (yet not identical) to the original LP set. But the original gatefold sleeve included some 75 or so color photos of the band onstage, and two of the four vinyl disc labels sported groovy fisheye photos. Instead, the box set includes an informative essay and a handful of photos, some not included in the 1972 LP set. Including those photos would have made an excellent set just a notch better, but in the end, it’s all about the music.

So yes, four discs of live Humble Pie is a heaping helping of Humble Pie. But if any live album from the era deserves this treatment, Rockin’ the Fillmore clearly does. As Marriott said, it’s a gas.