Bill Kopp: You’ve long been one of those artists who can handle everything in the studio; other than Nancy engineering, most of your albums have featured you on nearly everything. But sometimes you’ve brought in other musicians. On X you’re back to playing and singing everything. What to you is the difference in the end product between doing it all yourself and bringing in some other players to work under your direction?

Richard X Heyman: A lot of it just comes down to pragmatic reasons, financial reasons. In my bedroom recording, I can play guitar and piano; I’ve already done the drums in the studio. With those drum tracks [already done], I’ll put down a scratch guitar part and a scratch keyboard, then do my vocals, pick up a guitar…next thing you know, the track is done. So, it’s like, “We don’t really need to bring anybody in.”

Lately, people who were brought in were string players or horn players.

BK: Another of the hallmarks of your work is the manner in which you layer soaring harmonies – things that in another context might seem baroque, like Pet Sounds era Beach Boys – on top of hard-rocking playing that has more in common with The Smithereens. “Compass” is a great example of this dynamic. Would you say that’s just happy coincidence, or has that been an explicit goal of yours all along?

RXH: It goes back to the saying, “Nothing’s created in a vacuum.” Go back to The Who‘s first album [The Who Sing My Generation] and you’re gonna hear that. Three-part baroque harmonies on top of rockin’ playing. It’s just a style tat I grew up with; I’m not creating anything new there. You have groups like The Byrds where the backing track wasn’t maybe quite as rocking, but you’ve still got that idea of this powerful rock band playing with these big harmonies on top. And of course it goes back to The Every Brothers and The Beatles‘ stuff, too.

BK: With “Firing Line,” you’re disproved the argument that all the great riffs have been done already. Did this song arise out of a riff, or did you write the song and then come up with a riff to layer on top of it?

RXH: I’ll tell you a story about that. I wrote that riff in about 1969. On piano. I had this song called “My Baby Sleeps With the Angels,” but I could never get the song to work. It was a good song, but I never was crazy about the whole thing. But it had that riff, a piano riff. So I tried for years to figure out what to do with this song, and I finally just gave up.

Eventually, I took the riff, transferred it to guitar, and, “Ah! This kind of fits with this song over here!” That’s how it happened. And it just happened to be in the right key.

BK: I bought the VHS tape of your music videos (X-Posures) several years ago. To my knowledge you’ve never reissued it on DVD. Is that something you’re considering?

RXH: Umm…if there was any sort of demand! I’m kinda waiting for something. (laughs) I’m glad when there’s a demand for anything I do; then I’ll take the proper action. Every now and then, people write to us and ask for a DVD, and we’ll physically make a copy of it ourselves, and send it to them. 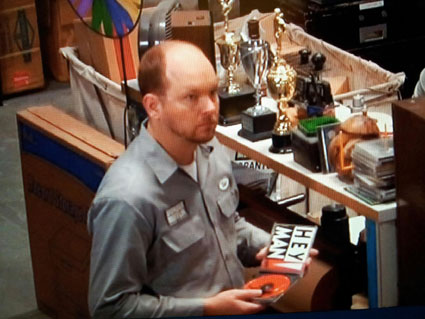 BK: Several months ago – on one of the last episodes of NBC’s The Office, a warehouse worker had a copy of Hey Man! in his hand. I took a picture of the screen and posted it on Facebook. It was only there for a second, but I thought it fascinating that someone in the prop department (I assume) chose to give an actor a CD released in 1991. It was clearly no accident; it was done on purpose. This sort of encapsulates for me the idea that – like it or not – you’re something of a “cult artist.” How do you feel about that?

RXH: Well…that could be looked at as a euphemism…

RXH: I know you don’t but I’m just saying…in context, it could be like the old story of, “I am a cult artist” meaning not-very-popular.

Those kinds of things are just in the view of particular people who think that way; some people don’t think that way. See, it’s human nature to categorize. You listen to music, and your first reflective action is to ask yourself, who does it sound like? People just need some sort of reference point when they’re dealing with any sort of art at all: “What does this painting remind me of?” It’s just the way people think; I do it myself. But most of the time I don’t get the connection that some people say that I”m supposed to sound like. But I’ve heard all kinds of things. 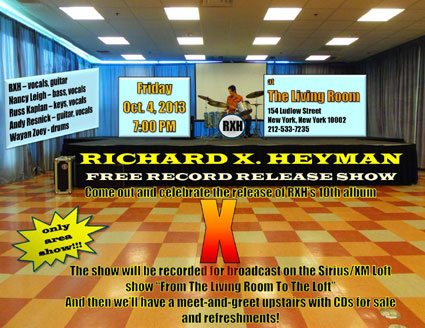 BK: What are your plans if any for presenting the music of X in a live setting?

RXH: We haven’t really been pursuing the live thing. We’re doing a one-off show here in New York on October 4th [TONIGHT! – ed.]. It’s a Sirius XM radio broadcast called The Loft. I have my old band together, and we’re rehearsing for that show. We’ll debut a bunch of songs from the new album, and do a couple of the old ones. So if anybody’s in New York, that’s where we’ll be. Seven o’clock.