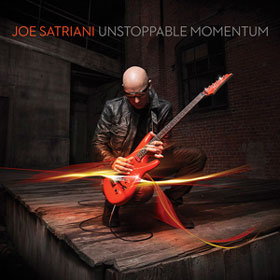 Joe Satriani is that unique guitarist who is both revered by the crowd that digs technically amazing musicians, yet possesses a great deal of mainstream appeal. That success is a function of the fact that he writes accessible, catchy and memorable melodies, as opposed to merely crafting vehicles upon which to lay a bunch of dazzling fretwork. His latest album Unstoppable Momentum continues in that vein while pushing the boundaries in several directions. I recently spoke with Joe about the album and other topics. – bk.

Bill Kopp: Unstoppable Momentum seems like a perfect title for the new album; it’s something like your fourteenth album of new material. I have often wondered: when one removes the lyrical component from a song – or, rather, never puts it in to begin with – it’s up to the texture and melody to convey the thoughts and emotions associated with the song. When you’re writing a song, do you have a story or ideas, so to speak, in your head? Put another way, even though there are no words, are your songs “about” things?

Joe Satriani: Absolutely. I guess I took my cue from classical composers, jazz composers, and film score giants of the last few hundred years; they wrote amazing instrumental music about very specific things. I’m writing music about people I know, people who I interact with, things that happen to me, things that I witness, things that I read about, and even things that are just fun to daydream about, to imagine. The songs are always about something.

BK: I have your first two albums and the Dreaming #11 EP on vinyl. And I love those records. Your guitar playing is timeless, and – at least from the perspective of the record buyer – seems to have exploded onto the scene fully formed. Two questions about that. One, how would you characterize the changes in your style, or approach to playing, since those early albums?

JS: I like to think that in certain areas – if I can go a little guitar-geeky here – that I’ve gotten better at a number of things that I started working on when I was extremely young. A lot of that has to do with misdirected energy; when you’re really young, you’re full of energy, and sometimes…y’know. Some of it gets burnt up in no direction at all. And you can keep at not only the composing, but the quest to be technically more effective. Because you don’t want people to really be reminded of the technique; I prefer that it’s hidden. I don’t want people to think of me that way; I just want my technique to serve the song.

Sometimes, in other fields, you want to be rewarded for the display of technique, but that’s actually the opposite of what I’m looking for.

The trick is to be able to have all that quality in your execution, but you only want your audience to hear the story, the emotion behind the playing. And that’s what I hope I’m getting better and better at with each record: at conveying music and emotion while the technique gets better.

BK: The only thing about those early records that sounds dated is the drums; on the earliest material, it’s a little stiff and less “organic” than your later material. Would you agree, and if so, is that a function of (a) using real or non-electronic drums now, or (b) your loosening up in terms of your composition?

JS: It’s important to know that the very first EP that I did on my own label (Joe Satriani, 1984), there were no drums. There was no bass guitar, no keyboards. It was all guitar; a very avant-garde approach to making a guitar album. This was my reaction to trying to carve a new road out without stepping on accomplishments made by Jeff Beck, John McLaughlin, and other guitar instrumentalists who were very popular when I started learning to play. So I came at it from a really outside point of view. And then the second record I did was a full length record called Not of This Earth (1986), which got licensed by Relativity; that was the first full-length record that I did where I brought in some real drums, some drum machines, and I played bass and keyboards as well as guitar.

I suppose that I – and John Cuniberti, who engineered the record and co-produced with me, and drummer Jeff Campitelli – we were always looking to do something a little bit strange. We were purposely saying, “We’re not gonna have a regular drum kit playing drum fills here and there. We’re going to do, let’s say, a drum machine kick drum, a real snare drum and hi-hat cymbals, and no drum fills.” So in a song like “Not of this Earth” or even “Flying in a Blue Dream,” there are no drum fills at all. That might seem bizarre, but stylistically we were fans of Kraftwerk and unusual computer music as well as Hendrix and The Beatles.

So what came out of that was a really strange combination of what you just mentioned, basically a stiffer rhythm section. What it was, was creating a different canvas for the guitar. And of course we’ve released so many live DVDs with all of those songs done in the human way, and it’s a very stark contrast, isn’t it? “Flying in a Blue Dream” from Live in San Francisco (2001) and the version from the album are very different in their feel.