Saturday was the third and final night of Hopscotch 2013, and our second night. Equipped with a more realistic game plan, we ventured forth with plans to take in a more modest number of shows. In the end, we saw even fewer than planned, but what we did see and hear was impressive. We almost completely missed uber-heavy rockers Solar Halos at Lincoln Theatre; we caught the last few seconds of the last song, and then wasted time waiting for a band we thought was something we’d like (but turned out to be run-of-the-mill black metal with Cookie Monster vocals). 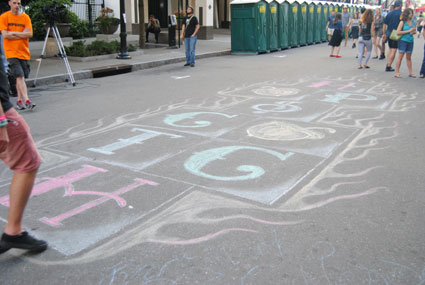 When we ventured to The Berkeley Cafe for an 11pm show, we found the venue so impossibly packed that we split before The Beets came on; that was a disappointment, as they’re pretty buzzworthy and were even recommended by Estrangers earlier in the evening), but the drunken-fratboy contingent coupled with the so-packed-you-gotta-take-turns-breathing vibe made staying an unappealing prospect.

But we did really dig the shows we dug, so to speak.

The Breeders
With an early (6:50pm) start time and a high-profile venue (City Plaza, the fest’s sole outdoor concert setting), The Breeders were virtually guaranteed a good crowd. And that they got. In fact this set was the one time that Hopscotch felt like its big brother festivals (Bonnaroo, etc.), thanks to a “managed” photo pit and enforcement of the “first three songs” rule for photographers. The all-female (except the drummer) band came out to rapturous applause, and wasted no time delivering their most well-known song (“Cannonball”) right up front. A gutsy move on their part, but they had plenty of other quality material on hand as well. The entire band looked pleased as punch to be there, all smiles and power chords. Though the band went on hiatus back in 1995, and has been together only sporadically since that time, they reunited to tour in support of the 20th anniversary reissue of Last Splash. This tour includes all of the band members from that 1993 release, augmented by a keyboard/utility player on some songs. We got some nice photos.

Photos © Bill KoppJohn Cale
It was a puzzlement, the run-up to this show. Would Cale play “The Gift” from his Velvet Underground days? Maybe some of his well-known material from later-day collaborations with Lou Reed or Brian Eno? Would he put on a heavy rock show with the strum und drang of his mid-70s work? Would he play violin or viola?

The answer to most of these questions would turn out to be “no.” Backed by a guitar-bass-drums trio, Cale mostly played his Kurzweil keyboard (primarily set on “piano,” occasionally producing organ sounds) as he ran through a set heavily weighted toward his more recent material (2012’s Shifty Adventures in Nookie Wood). His voice was intact – he sounded like the Cale of old – but the material was surprisingly conventional and pop-oriented; the tunes were almost singalong numbers, in places.

Photos © Audrey HermonSing-along, that is, if (a) you knew the words and (b) you ignored the delightfully skronky, atonal guitar leads being cranked out onstage. Set against the backdrop of Cale’s poppy tunes, the lead guitarist played bizarre scales, and got all manner of squawks out of his guitar. The most well-known commercial example of this style might be the guitar lines Robert Fripp played on David Bowie‘s “Fashion” way back in the late 70s. While the guitar work was jarring – and often seemed to be in a key other than the rest of the onstage music – it added a nice bit of texture to what would have otherwise been a surprisingly ordinary set of songs.

But the biggest surprise was the crowd, or more accurately the lack thereof. The audience at Memorial Auditorium numbered no more than about 500 when Cale’s set began; by the end it had dwindled to about 150, a good third of who stood at the stage’s edge, in the orchestra pit. The crowd dug it when Cale finally moved away from his keyboard to play some guitar (both acoustic and electric) but the whole affair was oddly conventional. Still, any opportunity to see a legend onstage shouldn’t be scoffed at. And scoff we did not.

Musoscribe’s 2013 coverage of the Hopscotch Festival will conclude with a feature on Winston-Salem-based Estrangers, one of the best things about this year’s festival.