His Phone Calls Suck. But You Will Laugh. 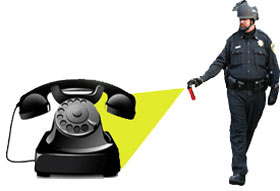 And now for something completely different. If you’ll forgive this sort of inside-baseball indulgence, I’d like to share some spit-take-inducing mirth with you.

You might not have given much thought that such a thing exists, but in the music business there’s a job title known as “music publicist.” This person – sometimes in the employ of a record label, but more often contracted by a label, management or artist for the duration of a project – bears the responsibility of getting the word out about (for example) an artist’s latest album. He or she creates a press kit, promotes that kit to a mailing list of publications and freelancers, follows up with them, makes advance copies of the music available, and facilitates interviews and show passes.

It’s a lot of work, and although some publicists make a great living at it, most do it primarily for the love of music and the people who make it. In that way they’re similar to the musicians themselves as well as the writers who cover ’em. In fact, there’s a tremendous amount of overlap: many publicists are musicians themselves, and even more are (former) music journalists.

There’s one component of the music publicist’s job that’s not often remarked upon, and that’s the role of gatekeeper. All manner of opportunists, rank amateurs and just-plain-clowns are constantly lining up for free show passes, free CDs, free access to the artists, free whatever anything and everything. And the chutzpah with which they request (and often, believe it or not, demand) these things is shocking. It’s the publicist’s often unpleasant responsibility to keep these characters at bay. Sometimes they’re harmless/clueless, sometimes not.

But, in the right light, said chutzpah is also funny. Very funny. So funny, in fact, that collecting a bunch of the exchanges (via text, email, telephone, etc.) between them and publicists might make a great blog.

And guess what: such a blog exists. More remarkable is that all of the exchanges on that blog are transcripts of the experiences of one man. One person. That person is Rey Roldan, president of Another Reybee Production, Inc., a NYC-based PR firm that represents A-list artists (as well as a number of up-and-coming ones, and some hey-we’re-back ones you’d be delighted to know about). He was involved in the early success of Britney Spears, and to his credit, he’s unashamed of this fact.

In my own role as a music journalist, I am in communication with perhaps a half dozen or more music publicists every work day, and while the overwhelming majority of them are supremely professional and a delight to work with, Rey rises above even that standard. A consummate professional. But he’s also possessed of a wicked sense of humor. Here’s an example from his Tumblr blog, My Phone Calls Suck (it should go without saying that Rey redacts identifying information from the transcripts he publishes:

FAN: I am looking at whether or not to get a VIP badge for the [FESTIVAL] this year and just wanted to see if one of the ‘perks’ or opportunities is to actually meet members of the cast of the [FILM] itself? There isn’t very many details yet on the website but I see that the early bird date is approaching so just making sure before I make my purchase.

ME: Hi there. Unfortunately, purchasing a VIP badge doesn’t insure meeting the cast of [FILM]. Sorry.

I am the editor in chief of [MAGAZINE], a weekly online arts and culture magazine. Would [BAND] be available for an interview hosted by [MAGAZINE] in August, September or October? It can be on a day of his preference (we just need to know the date and specific time), as long as it is in the evening hours EST. The whole band can participate.

ME: Hi there. The band won’t be touring till this fall so I won’t know what their schedule is till closer to the kickoff. By the way, what’s the “urgency”?

E: Thanks for your swift reply. That’s fine. Whenever you find out. Thanks.

E: Oh there was none. I needed to get your attention since publicists tend to ignore me.

M: This is just the beginning of our relationship and already you’re starting with lies? How am I going to believe you when you tell me you’re going to be working late at the office? Or that this girl “Clarice” is just a coworker? Or that the lipstick stain on your lapel must’ve come from the drycleaners? No wonder I have trust issues!

E: Hi there, Rey. Was that email meant for me?

Though you’d be forgiven for thinking, “this guy is just a really good comedy writer; clearly he’s making this stuff up,” he’s not. These are real. People are really this bizarre, random and blissfully un-self-aware. But whether they meant to or not (and clearly they didn’t) they have justified their existence on some level: via Rey Roldan, for you amusement. It’s comedy gold.  Go have a look.