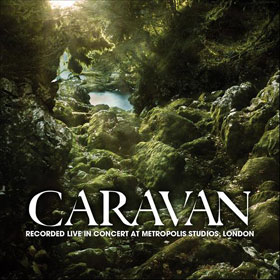 Even when I was a kid, I’d read the liner notes of the LPs I’d buy. And I’d look at the printed inner sleeves when they were included. It was via those four-color sleeves for Moody Blues albums (on the London label) that I first heard of artists such as Danny O’Keefe, Savoy Brown, Ten Years After and Caravan. Those sleeves depicted album covers featuring those artists, some nine (or was it sixteen? I’d have to go look) per side.

And while the TYA and Savoy Brown albums would be relatively easy to find in the 70s (O’Keefe’s 1973 Breezy Stories somewhat less so) I never did stumble across a vinyl copy of Caravan’s In the Land of Grey and Pink. One saw those LPs in stores much less often than, say, Stonedhenged or Watt.

Needless to say, I never heard the music, either. The Hobbity album art didn’t intrigue me all that much, so I was less than inclined to go on a search for it, anyway.

Fast forward to the late 1990s, a time during which the whole bootleg collecting and trading thing really took off for me. At that point I was voraciously consuming new (well, new-to-me) music – albeit of the unreleased variety – by all manner of groups. Beyond laying my hands on Beatles, Pink Floyd and Todd Rundgren session outtakes and live concert recordings, my particular interest leaned toward out-of-print powerpop and live/radio broadcasts by progressive rock bands.

The latter led me, finally, toward Caravan. I first got a bootleg (possibly a dub of a quasi-legal release) called Green Bottles for Marjorie. The sound quality of these BBC broadcasts was pretty wretched, but the strength of the music shone through. While Caravan is often lumped into the “Canterbury scene” category, their sound reflected a sort of distillation of the best qualities of jazz, filtered through a very pop-oriented rock sensibility. The end result of that process was music that was catchy, friendly, and ambitious. And the vocals of guitarist Pye Hastings (who these days resembles no one so much as Bill Clinton) had an everyman quality about them, so any arguments about the band being pretentious (a la Yes, for example) were largely rendered moot.

I eventually tracked down a number of Caravan albums – legitimate ones – albeit on CD. (Porcupine Tree‘s Steven Wilson has recently been involved in remastering of some of Caravan’s best-loved material.) And most recently, thanks to an American expat friend who lives in Budapest Hungary, I am now the proud owner of a few vintage Caravan LPs, including the elusive In the Land of Grey and Pink.

Caravan’s lineup has changed pretty constantly over the group’s history; only Hastings remains from the original 60s lineup. And the sound has changed in subtle ways, most notably when the group added violin (but hey, that was in the 70s). Former members left and sometimes returned (a la Yes again), often joining or forming their own groups (Camel, National Health, etc.) that shared sonic similarities with Caravan.

But somehow Caravan has soldiered on. Having gone inactive, sometimes for long stretches, the group surprised many by reconvening in 2010 for a one-off at London’s Metropolis Studios. That venue has been host to some other excellent live-in-studio concerts before small audiences, including sets by The Zombies, Bill Nelson and Van Der Graaf Generator. That Caravan session has been released as Recorded Live in Concert at Metropolis Studios, London. And the CD+DVD set finds the 21st century lineup of Caravan every bit as musically compelling as ever.

The five-piece 2010 lineup of the band included stalwart Hastings plus Geoffrey Richardson (guitar and viola, a member since 1972, with some gaps), Jim Leverton (bass since 1995), Jan Schelhaas (keyboards on and off since 1976), and new member Mark Walker on drums. Founding member (now retired) Richard Coughlan joined the band for this set.

The twelve songs (the set is duplicated in its audiovisual entirety on the DVD) balances older, classic material from the group’s 1970s heyday with newer material, some of which has never been released in any form until now. “Memory Lain, Hugh” and Headloss” are two extended pieces that Caravan fans would expect to find here, and the band opens with them, doing so in style. “And I Wish I Were Stoned” dates back to Caravan’s 1970 LP If I Could Do It All Over Again, I’d Do It All Over You, and “The Unauthorised Breakfast Item” is the title track from the band’s last studio effort, released in 2003. The new songs fit nicely into the set, and are characterized mostly perhaps by their featuring more lyrics and less instrumental work.

But fans of the latter need not fear: though the group’s perennial favorite “For Richard” is not on offer in this set, the lovely “Nine Feet Underground” is here in all its multifaceted glory. Perhaps no other song sums up everything Caravan is about: gentle vocals, knotty time signatures, dazzling instrumental displays, and an insistence on melody above all else.

Unique among similar reunion/nostalgia excursions, Recorded Live can be recommended equally to that small group of longtime fans as well to listeners wholly unfamiliar with Caravan’s music. Sure, these guys (save Walker) are in their sixties, but they’ve still got it.