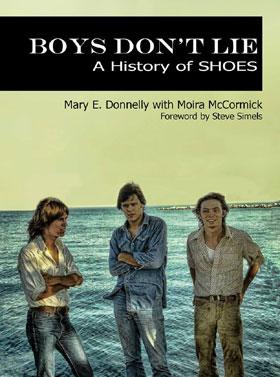 Sidestepping tired allusions to Boston‘s Tom Scholz, Guns’n’Roses and Chinese democracy, Boys Don’t Lie: A History of Shoes was a long time coming. Author Mary Donnelly began work on the book several years ago. Lots and lots (and lots) of interviews would form the basis of this exhaustive and supremely well-researched tome, and then various and unspecified production delays resulted in the publishing date being moved out, and moved out again. Still, I’m happy to report that the results are well worth the wait.

But wait: maybe you weren’t even waiting: who the hell, you might ask, are Shoes anyway? Well, if one uses normal measures of fame and notoriety, Shoes are a little-known group working in a little-known musical subgenre, hailing from a little-known Midwestern town. Not having ever visited Zion IL, I can’t vouch for the is-it-worth-knowing of the last part of that equation, but as far as whether you should know about Shoes, there can be no question.

Among the most revered of all groups in powerpop, Shoes have forged a long (if largely under-the-radar) career filled with gems of the highest order. Their brand of music – often as not, smooth and creamy vocals singing love/angst-oriented lyrics atop chunky guitars and a solid, propulsive beat – deserves a wider hearing than it’s ever got. Shoes’ deep catalog extends backward into the mid 1970s, and forward to right-damn-now. While the trio (they haven’t had a drummer as a full-time band member in decades) aren’t known for being serious road dogs (they have day jobs, families and and lives), their rare live performances show that their music does translate well to the stage. Among those who do know about Shoes, they’re sometimes spoken of in that same rarefied air in which Rapsberries, Badfinger and Big Star live. And you’ve heard of at least two of those, yes?

Donnelly’s book does an excellent job of sketching out the context in which Gary Klebe (vocals and guitars), Jeff Murphy (vocals and more guitars) and John Murphy (vocals and still yet more guitars, and bass) formed the band – with an especially wonderful and vivid first-chapter portrait of Zion, the decidedly odd town in which the three grew up and still reside – but she takes it a welcome step farther and helps the reader understand why it all happened. Only in Zion, you might say.

But it’s not as if their hometown encouraged Shoes in their musical pursuits; Boys Don’t Lie illustrates the paradox that the trio were all but unknown in their hometown; one suspects it’s still pretty much that way. They might be known as Gary, John and Jeff, but…Shoes? As likely as not, no.

The band’s history is a long and deeply textured one, filled with all of the kinds of things any story involving humans is bound to have: success, failure, alienation, hope, estrangement, and so on. Boys Don’t Lie is a very human story, and while it has neither the hugely uplifting denouement of the film Searching for Sugar Man nor the crushing disappointment, tragedies, death and what-ifs that defined the careers of Big Star and Badfinger, it’s a very good story.

One need not be a fan of Shoes – or even of their chosen genre (because, truth be told, Shoes’ music often extends beyond the narrow definition of powerpop) – to dive into the long written work that is Boys Don’t Lie. But odds are, part way through, you’ll want a soundtrack to help provide the context that no amount of excellent writing can provide. And for that, there are plenty of CDs available. The most succinct of these is Real Gone Music’s 2012 compilation 35 Years: The Definitive Shoes Collection 1977-2012.

That compilation (with Stephen “Spaz” Schnee‘s liner notes that could well serve as a teaser to the long-form Boys Don’t Lie) will also lead listeners to Shoes’ latest material, their 2012 album Ignition. Now, for a good chunk of the book, especially from the midpoint onward, thoughtful readers will begin to wonder, will this band even exist by the final pages of Boys Don’t Lie?

My take on the genesis of the project is that Donnelly wasn’t even sure herself of the answer to this question. In fact, the chapters that deal with Ignition have a slightly tacked-on feel, as if the book had neared its putative ending with Shoes more or less fizzling out, and then a spark of life was, er, ignited. In fact, in the end that tacked-on feeling fits the narrative perfectly; everything leads toward a somewhat desultory ending, and then near the last minute, pow: they’re back.

Whether events were quite that simple in real life doesn’t matter; Mary Donnelly’s telling of the story – based on more hours of interviews than one can probably imagine with the principals plus relevant witnesses and bystanders – is richly detailed. It never drags, and most readers will find themselves rooting throughout for the protagonists. Unlike some other famous (or infamous) acts, the men of Shoes were not their own worst enemies; with few exceptions, they didn’t get in the way of their own success. And on those rare occasions when they did, their actions were of a sort of common-sense character that might leave the reader saying, “Yeah, well, in their situation, I might have done the same thing.”

I’ve endeavored to avoid usage of the word cult in describing Shoes and/or their fan base, but it’s true that the group has enjoyed very modest commercial success, and also that their fan base is a small as it is dedicated. But they have some friends and allies in high places: renowned music-journalist-then-label-rep-then-music-publicist Cary Baker was an early and steadfast champion of the band from the earliest days, and Real Gone Music head Gordon Anderson has been (like music journalist John Borack, producer of a tribute CD) a lifelong fan of Shoes.

Badfinger got their book (Dan Matovina‘s controversial 2000 Without You: The Tragic Story of Badfinger), and Big Star got their movie (2013’s Big Star: Nothing Can Hurt Me) and now, thanks to Mary Donnelly and the patient and long-term cooperation of the band members themselves, Shoes get their history told in a deservedly in-depth manner. A must-read.