Let George Thorogood Tell You Something, My Friend (Part Two)

Those early years were tough ones, Thorogood said. “For Jeff [Simon, drums] and I, from 1975 until the time we put out the second record, those were not pleasant years. We were constantly banging our heads against the wall. Day in, day out.” Thorogood recounted a 1977 conversation he had with another well-known recording artist he won’t name: “You got it really easy,” said the unnamed musician. “You don’t have it tough like I had.” “Oh yeah?” Thorogood responded. “So how tough did you have it?” “Well,” this character is said to have responded, “Our band didn’t get together until January. We didn’t get a record deal until March. And our first record didn’t come out until June.” Thorogood laughed acerbically at the memory. “I wept for him.”

Thorogood had a plan in place by 1974. “I wanted to sign with Capricorn Records, but they folded on me! They went out of business in ’75, but they [would have been] the perfect label for us.” He recalled thinking, “We’ve got the tunes, we’ve got the live act. But we don’t have a deal. What are we gonna do now?” At that point they had neither an agent nor management, so Thorogood had made the pitch to the soon-to-be-defunct label himself.

I remarked that to my ears, Move it On Over avoided the so-called sophomore slump, and actually succeeds overall more so than the debut. The production, the playing, the song choices (again mostly covers) all seem a notch above the first record. But Thorogood insisted that the songs on Move it On Over were mostly just leftovers that didn’t make it onto the first LP; taken together those two records represented the band’s live repertoire. “That was material I had been researching since about 1969,” the guitarist said. And as far as the higher quality recording, Thorogood sneered, “Shit. The cash register doesn’t lie. After the first album came out, all of a sudden everybody started being very nice to me. Y’understand?” Pausing for effect, he then continued. “Let me tell you something, my friend. Remember this at all times: finance dictates loyalty.”

There aren’t any previously-unreleased tracks, or new contemporary liner notes, or any other bonuses on these new Rounder releases of George Thorogood & the Destroyers and Move it On Over. I asked Thorogood what, then, was the goal of their 2013 reissues. “There’s a whole new audience now who’ve never heard those records,” he noted. “It’s like putting On the Waterfront on the TV. Because there’s a lot of 30-year-olds who’ve never seen it!” and then added, “And another reason: There’s money in it!” 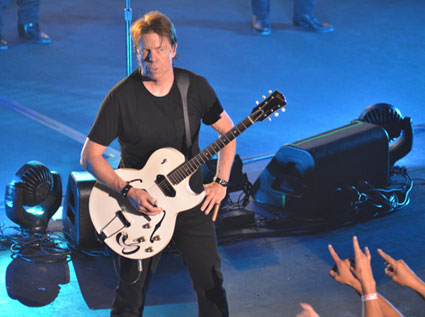 I observed that Thorogood’s signature style could be thought of as the sweet spot between Chuck Berry and Johnny Winter. I asked him what he saw, in those lean and early years, as his musical mission. Initially, the question seemed to stump him. “Hmm. My musical mission was to work as a live rock performer. People ask me: ‘What do you do? How do you see yourself? Where were you headed? What was your thing?’ And I remembered something a reviewer wrote about me a long time ago: ‘Thorogood playing live is cut right out of the mold of Mick Jagger and Peter Wolf. Those are really his heroes.’ And,” Thorogood admitted, “She was right.”

And he’s still at it, maintaining a full touring schedule (and some new studio material, though he was cagey on the details concerning the latter; “Yeah, always,” was all he’d say about his studio activity). “People say to me, ‘You never really made it.’ But that [being a performer in the mold of his heroes] is still where I am. Maybe I’m not the best at it…but I’m still at it!”

I closed our conversation by asking him how he thinks his music has changed in the thirty-five-plus years since his first album.

“Meaner. I’ve just evolved into more of what I’ve always been. Like actors say, you can take what you already own and become better at that. The band we were even ten years ago is a joke compared to what we are now. Come out and see us, and you’ll see.”

I noted that the band doesn’t have any upcoming dates in my part of the country.