Let George Thorogood Tell You Something, My Friend (Part One) 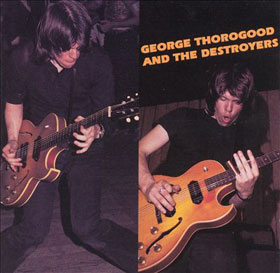 At the appointed time, our mutual contact connected me on the phone with George Thorogood. After a second or two of line noise during which all parties adjusted to the phone call, the renowned blues/rock guitarist shouted an enthusiastic “Hello!” down the line.

“Bad.” The single-word reply hung in the air, followed by a second or two of my nonplussed silence.

A second of silence on Thorogood’s end. Then: “Bad to the bone.”

“Oh…so that’s how it’s gonna be,” I thought to myself, chuckling inwardly.

And fair enough, I thought. After all, even though it’s mid 2013, our conversation this day would center on Thorogood’s first two album releases, 1977’s George Thorogood & the Destroyers, and Move It On Over from the following year. So making a pop culture reference from thirty-plus years ago (specifically, the title of Thorogood’s hit 1982 album) wasn’t thematically too wide of the mark.

Those first two records have now been reissued by Rounder Records, and so rather than simply reviewing the discs, I took the opportunity to score a few minutes with the man himself. “I’ve got time for you,” Thorogood assured me. “The others, they can wait. My time is yours, my friend.”

I observed aloud that the Rounder LPs have worn well due in part to their avoidance of production gimmicks of their era, giving them instead a no-sheen, timeless feel. Thorogood saw it differently. “Nah. Sometimes finance dictates what something’s gonna be. Rounder didn’t have any money, and neither did I. And personally, I don’t think those records sound very good. The first record that we cut that really sounded decent was Maverick [Billboard #32 in 1985, and self-produced]. Because it sounded good on the radio. The guy who recorded the first album had no idea what we were about. Rounder was a bluegrass label; they played banjos and violins and sang bluegrass harmonies.” 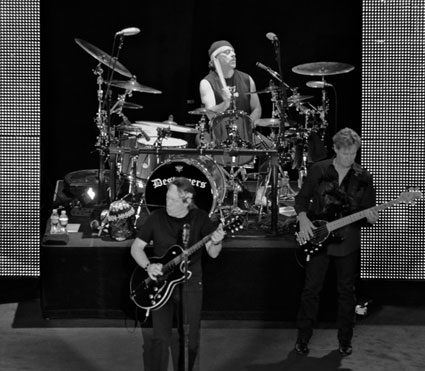 “I was into Elvin Bishop and Buddy Guy and Duane Allman and Robert Johnson!” Thorogood continued. “I was into the shit, Bill!” He went on to explain that the people at the label “had no idea what I was trying to say.” Having described his sound to them as “John Hammond meets Johnny Winter with a little bit o’ J. Geils thrown in,” he recalls producer John Nagy‘s response: “Who are they?” He notes that Nagy “called himself a producer, but he was just an engineer, really.”

Thorogood still fumes that once the record was completed, “it sat on the shelf for eighteen months. Eighteen months!” he repeated for emphasis. At the time, Thorogood was justifiably worried that the delay could cost him success. He notes that both the Allman Brothers and Tom Waits had cut versions of “One Bourbon, One Scotch, One Beer.” Thorogood recalls telling Rounder that if they didn’t get his version out soon, his “career is gonna be over before it starts.” So they suggested he record another song instead. “This is a goddamned classic. What are you talking about?” He replied.  They finally relented, but when they did put it out, “Then they wouldn’t even spring for a picture!” He says that Henry Horenstein‘s cover images were mere snapshots.

Some published accounts of the band’s early years recount that George Thorogood and the Destroyers played blues joints. The guitarist takes strong exception to that. “We were not playing blues clubs. Those folks didn’t want us. They showed us the door.” So where did they play? “Anywhere we could. But they were not blues clubs; trust me.” Those high energy gigs – mostly in the Delaware Valley and central Pennsylvania – did establish the trio as a musical force to be reckoned with. But the places they played didn’t, Thorogood insists, even understand blues: “They thought The Supremes were a blues band! They didn’t get it, man.”