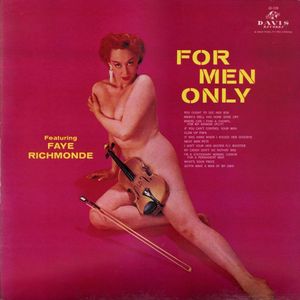 Though neither of my dear, sweet parents could ever carry a tune in the proverbial bucket, there was plenty of music in the Kopp household as I was growing up. By the mid- to late 1960s – the time at which I developed an interest in such things – Mom and Dad had amassed a tidy little collection of perhaps two hundred LPs. As I began to investigate them, I was (as mentioned elsewhere) most intrigued by the one with the cover photo of four half-lit faces (Meet the Beatles). But another record caught my eye as I got a tiny bit older.

For Men Only sported a scandalous looking record sleeve. On its hot pink cover was a “mature” woman wearing nothing but a strategically placed violin. The sleeve listed some of the song titles, and even an my prepubescent years I could tell there was, er, something going on here. Song titles like “You Ought to See Her Box” and “It Was Hard When I Kissed Her Goodbye” left little to the imagination. The sleeve implied that the naked cover sleeve lady was one Faye Richmonde, but the dark blue halftone picture on the back suggested that the actual Miss Richmonde (the singer) was in fact a much lovelier and younger African American woman.

The record was on the Davis Records label, and both the liner notes and songs were credited to a Joe Davis. In those liners, Davis suggested that You Might Also Enjoy another of Faye’s albums (also helpfully available from Mr. Davis for the mere sum of $3.98) called A Little Spice. Dad had that record, too; it sported a much naughtier (albeit black-and-white) photo and better song titles (“If I Can’t Sell It, I’ll Keep Sitting On It,” “She’s Nine Months Gone From Home,” “Keep Your Nose Out of Mama’s Business,” and so on).

I ended up with both of those records in my own collection, more for the kitsch factor of the cover and song titles than anything else. But when I discovered that Rock Beat Records had reissued For Men Only, I decided it would be a good excuse to write about it. So when I visited my parents last weekend (Dad’s in his mid 80s but as sharp as ever) I asked them about these albums. At first they both feigned total ignorance. Nope, don’t remember any such thing, they insisted.

Cleverly, I had brought the CD reissue along with me. And though Dad’s legally blind, when I set the jewel case down in front of him, he furtively glanced at it and quietly mumbled, “Oh, yeah. That.” Mom picked it up and read the song titles to herself, chuckling all the while. Unfortunately, neither of them really had much else to say about the whole thing.

I did a quick search online to see what information (if any) circulates about these oddball releases. I learned that Davis was charged with distribution or manufacture of pornography in New York (home to Joe Davis Record Manufacturer, on 49th street in NYC) in 1958 or so. (It appears the charges were dropped, dismissed or otherwise ruled against.) Used copies are readily available on eBay, but be prepared to shell out upwards of $35.

The Rock Beat reissue marks the first time For Men Only has gotten a legal/legitimate reissue on CD. The reissue has no liner notes and tells you far less about the whole thing than I’ve done in this short piece. But the audio transfer is very good, which is impressive considering that the vinyl slabs Davis pressed in the 50s are not exactly 180-gram quality.

You may notice I haven’t spent any time discussing the music. Well, while it’s not bad, it’s by far the least interesting component of this whole subject. Richmonde has a nice enough jazzy cabaret/lounge style voice, and the pianist (Davis himself?) plays along in a saloon style. There’s no additional accompaniment. The songs were likely recorded in a single take, a single session. They’re good for a laugh, and remain a bit bawdy even some 55 years later. A friend* who sometimes takes part in burlesque-type dance revues thinks that some of the songs on For Men Only and A Little Spice might be good accompaniment to an upcoming performance. Yep, I could see that.